The Biomedical Cluster receives the visit of Cristóbal Belda, director of the Carlos III Health Institute 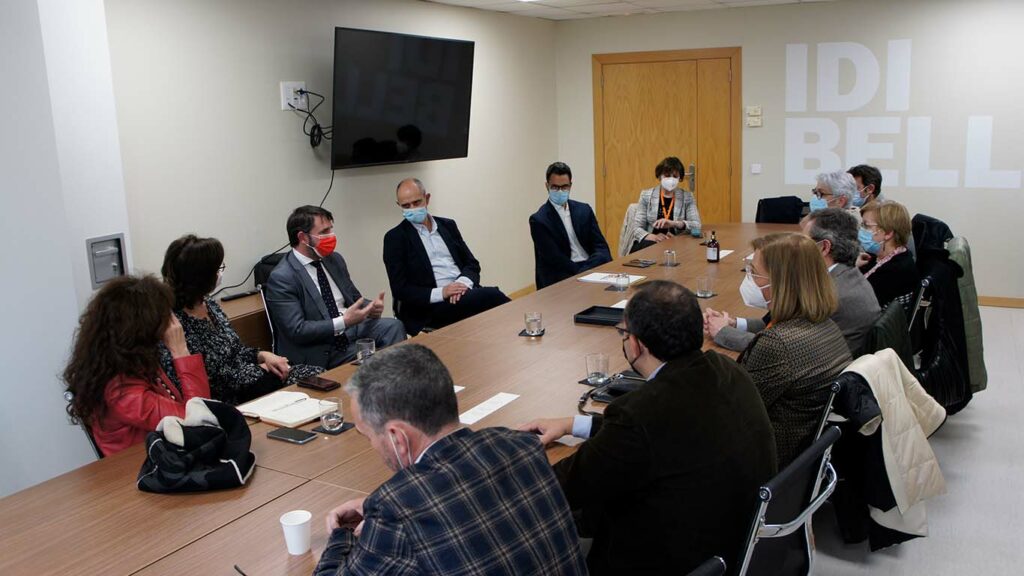 The cities of l’Hospitalet and Esplugues and the reference research and health institutions of the area are in the process of designing the Biomedical Cluster, an initiative that aims to promote and consolidate this ecosystem located to the south of the metropolitan area of Barcelona. After the invitation of the organizer, to know first-hand its key points and its latest advances, Dr. Cristóbal Belda, director of the Carlos III Health Institute, has visited the area.

Francesc Belver, first deputy mayor of the Hospitalet City Council, received him at Masía Cal Gotlla, headquarters of the Gran Vía Reform Consortium, where he listened to the strategic axes of the initiative and saw the model of the urban reform of the Gran Via.

Subsequently, the group went to the Bellvitge University Hospital to visit the Core Molecular Analysis Laboratory, a fundamental device for the application of personalized medicine, led by doctors Montserrat Figuerola, manager of the Southern Metropolitan Territorial Management (GTMS) of the Catalan Institute of Health and the Bellvitge University Hospital, and Encarna Grifell, director of Strategic Planning, Evaluation and Innovation also of the GTMS.

The delegation of the Carlos III Health Institute has also visited the Phase I Clinical Trials Unit of the Catalan Institute of Oncology -with its Director of Knowledge and Research, Dr. Ana Clopés, and the Director of Innovation and Quality, Dr. Tàrsila Ferro– and the laboratories of the Regenerative Medicine program of the Bellvitge Biomedical Research Institute -with its general director, Dr. Gabriel Capellá, and the scientific director, Dr. Fernando Fernández-Aranda.

Part of the delegation was also a group of representatives from the University of Barcelona made up of doctors Jordi Garcia, vice-rector for Research; Joan Miquel Nolla, coordinator of the Bellvitge Campus and academic deputy dean of the Faculty of Medicine and Health Sciences; and Jaume Pérez, Director of Innovation and Knowledge at Hospital Sant Joan de Déu, the hospital specializing in pediatrics and obstetrics involved in the project.

To develop the Biomedical Cluster, it is proposed the creation of new infrastructures and new services that will make it possible to take advantage of all the available technological resources and use them to contribute to improving the health of citizens. The project will be presented in the Next Generation EU funds and already has the support of the Barcelona Provincial Council, which has included it in Next Diba.