Sónar+D, IDIBELL and L’Hospitalet join forces to do a live experiment that will study the differences when it comes to discovering new music 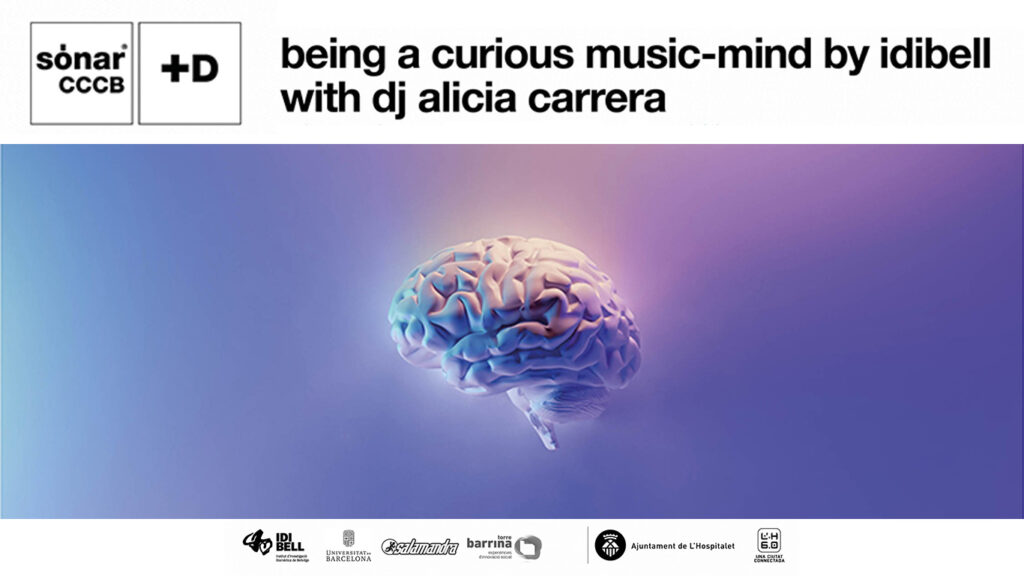 L’Hospitalet presents, once again, a hybrid proposal for Sónar D that combines art, research and innovation with the goal of designing new cultural content for an audience that demands novel experiences. The proposal is promoted in connection with the L’Hospitalet 6.0 strategy, which aims to accelerate innovation and digital transformation of the city and expects to be a meeting point between creativity and advanced technological innovation. It will bring together musicians, composers, cultural historians, technologists, scientists and developers in order to discuss, explore and demonstrate that the interaction between humans and machines can create environments that we had never imagined before, through a series of events that includes two sessions of an experiment that will explore the curiosity on music, a large plenary lecture and artistic productions created by some artists from the Cultural District.

“Being a Curious Music-Mind” by IDIBELL with DJ Alicia Carrera

Music plays a key role in our lives: it has the inherent ability to evoke a wide range of emotions and feelings and it is used as a powerful mood regulator. But strong individual differences have been observed in the intrinsic motivation to look for new music and enjoy it. For example, while some people spend a lot of time discovering new music, other people get stuck listening to the same songs and artists for years. In addition, there are also solid differences in our ability to experience pleasure in listening to music (the so-called musical hedonism), as well as in the susceptibility to go through transcendental experiences or states of maximum emotion.

With the purpose of exploring and studying the differences in the vibrant world of musical curiosity, the Sónar D festival, L’Hospitalet City Council and the Bellvitge Biomedical Research Institute (IDIBELL) come together to present a unique and inspiring proposal, full of talent and innovation thanks to the combination of culture, science and technology.

The team of neuroscientists from IDIBELL and the University of Barcelona led by Antoni Rodríguez-Fornells, for the first time and in a naturalistic environment, propose a scientific experiment that aims to characterize the differences in curiosity (and the search for new musical information) developed by listeners after being exposed to new musical pieces. Such differences will be assessed taking into account each individual musical profile.

During the first stage of the experiment, participants will be exposed to previously unreleased musical pieces and will answer questions throughout the session by DJ Alícia Carreras, specially prepared for this experiment. In a second stage, the following day, each participant will have to answer a questionnaire.

Two sessions for the experiment have been scheduled. The first will take place on October 29 at 12 noon at the Center for Contemporary Culture of Barcelona (CCCB) and the second at Sala Salamandra in L’Hospitalet, on October 30 at 12 noon. For both events, attendees, who must be over the age of 18, must bring a cell phone with data and a charged battery.

Antoni Rodríguez Fornells is a principal investigator in the research group on Cognition and Brain Plasticity at IDIBELL and a professor at the University of Barcelona. His latest work shows that listening to vocal music promotes recovery and brain health after a stroke and that brain structure determines individual differences regarding musical sensitivity. Intrinsically interdisciplinary, his research requires the interconnection of diverse fields, such as brain plasticity, brain development, and mechanisms of learning.

Tickets are available at:

In December, the plenary conference will focus on the impact and applications of artificial intelligence in creative artistic processes while also announcing the start for the facilities of Laura Llaneli, Saúl Baeza and Mario Santamaria. All three artists will lead different artistic installations that will help trigger reflections on the potential generated by the dialogue between art and technology.

The exhibition represents an artistic research line that Lolo & Sosaku have explored in recent works (“Stellar”), but for the first time it is produced together with new pieces specifically conceptualized and produced for the city. A post-anthropocentric imaginary and its narratives that materialize in a three-pronged project: an exhibition, a pedagogical project and a public program. But, it is also realized in a specific place and time: an unoccupied warehouse in L’Hospitalet as an ideal context to explore this speculative space-time, ideal, because the project can appropriate this post-industrial place as a fertile field for projecting this imaginary and thus reviving it.

With this exhibition, which will also take place in December, the strategic project of the L’Hospitalet’s Cultural District places at the disposal of the public an unpublished visual arts exhibition, both for the displayed works and for the staging of the exhibition, which expects not only to visualize the creative talent of local artists with an international trajectory but also to project the city as a first-category cultural creation and dissemination hub.

Share on Facebook
Share on Twitter
Share on Linkedin
Share on Email
Tweets by @idibell_cat
Tags: Cognition and Brain Plasticity, Neuroscience Area, Neuroscience Program, Outreach and education,
Manage Cookie Consent
To provide the best experiences, we use technologies like cookies to store and/or access device information. Consenting to these technologies will allow us to process data such as browsing behavior or unique IDs on this site. Not consenting or withdrawing consent, may adversely affect certain features and functions.
Manage options Manage services Manage vendors Read more about these purposes
View preferences
{title} {title} {title}
Scroll to Top