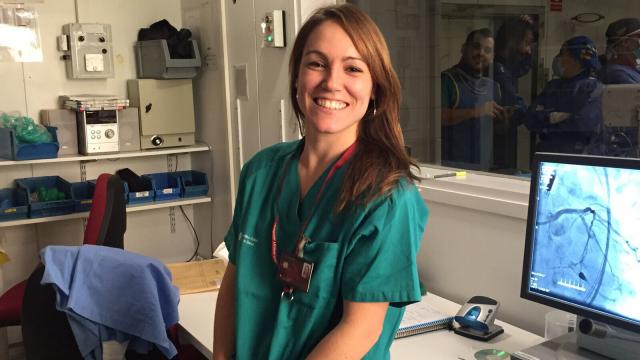 The work, led by Elena Calvo, nurse manager of hemodynamics in the Heart Disease Area of ​​the Bellvitge Hospital and researcher at IDIBELL, has been published in the International Journal of Nursing Studies, the journal with the highest impact factor in the field.

The aging of the population is causing an increasing number of older patients with acute myocardial infarction. These patients have a higher risk of complications and low adherence to medication, which, in turn, implies the use of more healthcare resources.

This study compared two groups of patients older than 75 years after undergoing percutaneous coronary intervention for myocardial infarction in our center. While one group received the usual follow-up, the second received a specific nursing intervention designed to reinforce treatment adherence.

Specifically, three months after receiving the treatment, they received an educational interview from trained nurses. Relatives and caregivers of the patients also attended to this visit to receive instructions. In the case of patients who could not move, the nursing team went to their home to carry out the intervention, or they carried it out by phone. The duration of this interview was approximately 40 minutes and it focused on some measures and recommendations to improve or maintain adherence. A reminder call was also made at 6 months.

At the end of 12 months, the adherence achieved was measured by applying two assessment tests: the attendance at visits and, the data on withdrawal of drugs from the pharmacy.

The results showed that, while only 21.5% of the patients with the usual follow-up achieved good adherence, in the case of the patients who received the specific nursing intervention the percentage rose to 51.9%.

These results confirm the importance of nursing in patient adherence, especially due to its educational nature. Nursing plays a fundamental role in the task of informing, motivating, and empowering the patient, encouraging them to have an active role and be a protagonist of their health, a key element to promote adherence.

Share on Facebook
Share on Twitter
Share on Linkedin
Share on Email
Tweets by @idibell_cat
Tags: Digestive system, diagnostics, pharmacogenetics, care support and clinical prevention Program, Nursing, Translational Medicine Area,
Manage Cookie Consent
To provide the best experiences, we use technologies like cookies to store and/or access device information. Consenting to these technologies will allow us to process data such as browsing behavior or unique IDs on this site. Not consenting or withdrawing consent, may adversely affect certain features and functions.
Manage options Manage services Manage vendors Read more about these purposes
View preferences
{title} {title} {title}
Scroll to Top