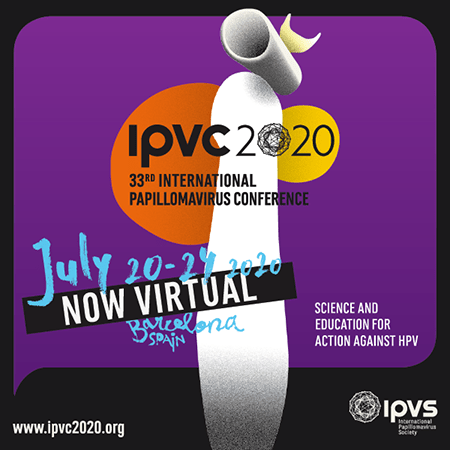 The 33rd edition of the International Congress of Papilloma Virus (IPVC2020), which was held from July 20 to 24, has been a complete success with more than 1,400 registered participants. This congress had to be held last March presential in the city of Barcelona, ​​but the pandemic situation of the COVID19 forced its suspension. Finally, it was held in a new virtual format organized by the professional team of the ICO-IDIBELL Cancer Epidemiology Research Program and by the IPVC.

This year, the theme of congress has been ‘Science and education for action against HPV‘, and through conferences and oral sessions the latest research results have been presented, from basic science to the impact on world health. On the other hand, special emphasis has been given to the importance of defining policies to face the prevention and control of HPV in the most vulnerable populations and the countries with fewer resources. In this sense, it is worth highlighting the relevance of studies on the treatment of pre-neoplastic lesions and cancers associated with HPV with immunotherapy.

This afternoon will close this congress with a plenary session by Francisco Javier Bosch, principal investigator of the IDIBELL group of infections and cancer, and with an appearance of the WHO director-general, Adhanom Ghebreyesus, who will explain the strategy of the organization to eradicate cervical cancer worldwide.

Parallel to this congress, the World Health Assembly (WHA), the supreme decision-making body of the World Health Organization (WHO), will propose on its agenda the approval of the global campaign to eliminate cervical cancer, once approved it will become a directive for countries to activate their contingency programs.

Probably, in the next few days, the resolution of this campaign will be announced and, as specified in this proposal, part of this elimination strategy will consist of introducing and expanding vaccination against Human Papillomavirus (HPV) since the most cases of cervical cancer are due to this virus. Thus, it has taken advantage of the impact and importance of the IPVC2020 to announce to the entire scientific community, and specialized public, this new project.