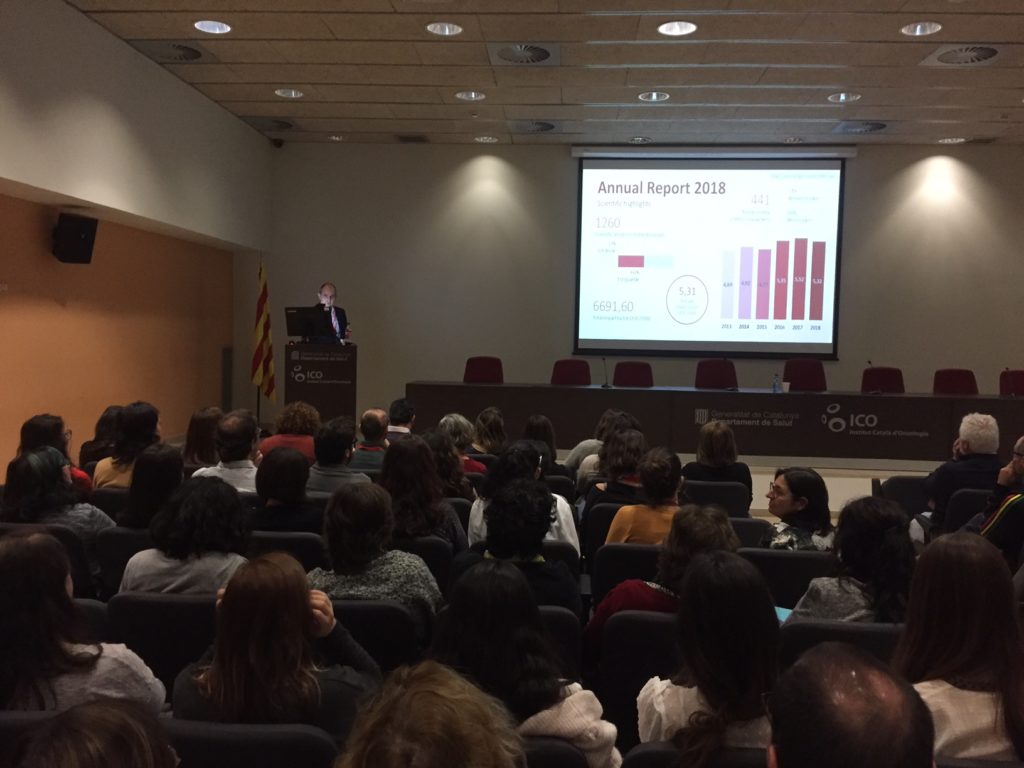 IDIBELL has held its annual transparency session, by the director of the institution, Dr. Gabriel Capellá. Before an audience of 170 people, gathered in the Pau Viladiu Conference Hall of the Duran i Reynals Hospital, Capellá has pointed the various items of a detailed and exhaustive report that, in summary, has laid special emphasis on the issues that we highlight here.

The session began by showing satisfactory data about the impact of IDIBELL research and innovation. He highlighted the ability of the centre’s researchers to develop high quality research, the increase in projects in the field of clinical research, success in the main national calls, and highlighted international successes. Next, the director has reinforced the institution’s commitment to encourage internationalization processes and knowledge transfer to the patient’s bed, referring to the 5 active spin-offs and 3 new spin-off projects that we hope will be consolidated during 2020; and also expand the dissemination and training activities. Dr. Capellá has emphasized research support structures, specifically the support for clinical research and scientific-technical platforms. He has then presented the new research organization of the institution: where research programs coexist with transversal actions that are expected to become a reality very soon. The effort of the pioneering research programs in their coordination, Oncobell and Neurobell, has been highlighted, establishing ambitious objectives that seek to enhance talent, promote interaction and visibility of their groups, and the rest of the Programs have been encouraged to follow the same dynamic.

Everything that affects equality and gender issues has been treated in a particularly sensitive way, since IDIBELL has been working for years on the implementation of policies that minimize gender scissors and fully support the role of Woman in the research system.

Dr. Capellá has briefly presented the advances in the establishment of the professional research career, as a reference framework in which our researchers are classified and the tenure-track are consolidated. He has also highlighted the group evaluations that are expected to be completed during 2020, as well as the effort in the professionalization framework of the IDIBELL seminars, IDIBELL Fellows’ and the training program.

The integration of the Center for Regenerative Medicine of Barcelona in IDIBELL has been highlighted as excellent news, which opens a fruitful future for research, collaborations between groups and the national and international positioning of the institution.

The departure of the researchers of the Cancer Epigenetics and Biology Program has been analyzed from the perspective of the lessons learned and improvements implemented during the process.

Another outstanding feature is the fact that IDIBELL has recently passed satisfactorily through three external evaluations, Research Centers of Catalonia (CERCA), Carlos III Health Institute, (ISCIII) and AECC Foundation (FCAECC), very intense evaluations that All of them have contributed an external critical vision with proposals for improvement to continue advancing in the excellence of the Institution. Besides, the annual visit of the Scientific Advisory Board that took place in May, a meeting that deepened the investigation of the programs evaluated during the current annuity.

On the other hand, the implementation of the IRISCAT alliance, promoted by the Health Department of the Generalitat de Catalunya, has also been mentioned, because it has to impact, in the near future, the research strategy, the RRI and the management of the human resources of the health research centers that are part of it, among which IDIBELL.

Finally, Gabriel Capellá has reviewed the activities of scientific dissemination of IDIBELL, with a special mention to the open day Synergy, which took place, for the first time, this past November. He also highlighted the events and actions to celebrate the IDIBELL  15th anniversary, which have allowed, among other things, to visualize cases of success in research that mark the history of the center. The birthday events will conclude next Friday, with the celebration of the Christmas Concert of L’Hospitalet and the IDIBELL. The director’s last words announced that, for the next year, a new edition of the patronage and communication campaign “We save lives” is being prepared, dedicated to seeking funds and giving visibility to the Neurobell neuroscience research program.