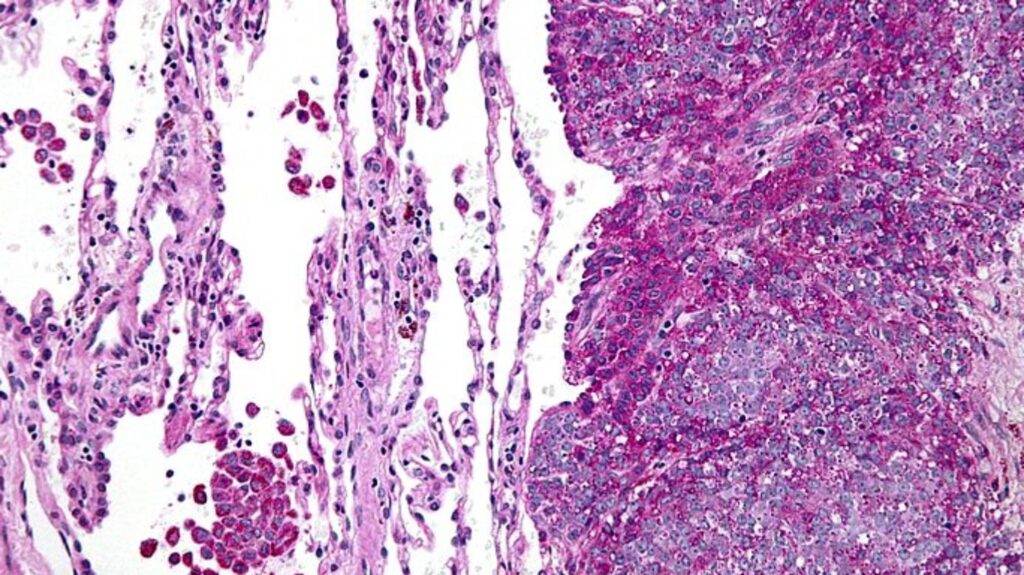 Caveolin-1 participates in the formation of new blood vessels around the tumor, facilitating growth and proliferation

Researchers from the Bellvitge Biomedical Research Institute (IDIBELL) led by the head of the research group in sarcomas, Oscar Martinez-Tirado, have discovered one of the mechanisms that triggers angiogenesis (formation of new blood vessels) around tumor cells of Ewing’s sarcoma, a very aggressive childhood cancer.

The results of the study, published in the journal PLoS ONE, open the door to a new line of research of potential therapies for this tumor.
Ewing’s sarcoma is the second most common bone cancer and affects children and youth. Currently, if diagnosed early and there is no metastasis it can be cured in 80% of cases but between 25% and 30% of cases are diagnosed when it has metastasized and survival drops to 30%.

Angiogenesis is a key process in the growth, proliferation and migration of solid tumors. Tumor cells need new blood vessels that provide extra oxygen and nutrients they need to grow so quickly.

The group of Oscar Martinez-Tirado has described in several studies the functions of caveolin-1 protein in Ewing’s sarcoma, “We have seen that it plays a tumorogenic role in this type of tumor, which is involved in resistance to chemotherapy, which favors metastasis and in this paper we have shown it plays a critical role in the angiogenic process. ”
Researchers found that, in cell lines genetically modified to not express caveolin-1, tumors were smaller, had more necrosis and vascularisation index was significantly lower than in lines with caveolin-1. “Therefore, the lack of caveolin-1 inhibits angiogenesis” said Martinez-Tirado.

The researcher explained that although caveolin-1 appears to be a potential therapeutic target to combat Ewing’s sarcoma, its location makes it very difficult to access “so we have to search for proteins that bind caveolin-1 and can take this role”.
In this sense, the study describes how caveolin-1 interacts with another protein called EphA2 activating a signalling pathway that induces angiogenesis, more particularly the migration of cells that should form the vessels to the tumor. According to Martinez-Tirado “this protein is a membrane receptor that could be a good candidate for therapeutic target.”

This finding opens the door for future therapies. “Now we must consider whether in addition to being involved in angiogenesis, EphA2 protein is tumorogenic per se. If so, we have the perfect target. Our vision for the future is to use this protein as a vehicle to release toxic substances in tumor cells” Oscar Martinez-Tirado said.

Share on Facebook
Share on Twitter
Share on Linkedin
Share on Email
Tweets by @idibell_cat
Tags: Sarcoma,
Manage Cookie Consent
To provide the best experiences, we use technologies like cookies to store and/or access device information. Consenting to these technologies will allow us to process data such as browsing behavior or unique IDs on this site. Not consenting or withdrawing consent, may adversely affect certain features and functions.
Manage options Manage services Manage vendors Read more about these purposes
View preferences
{title} {title} {title}
Scroll to Top