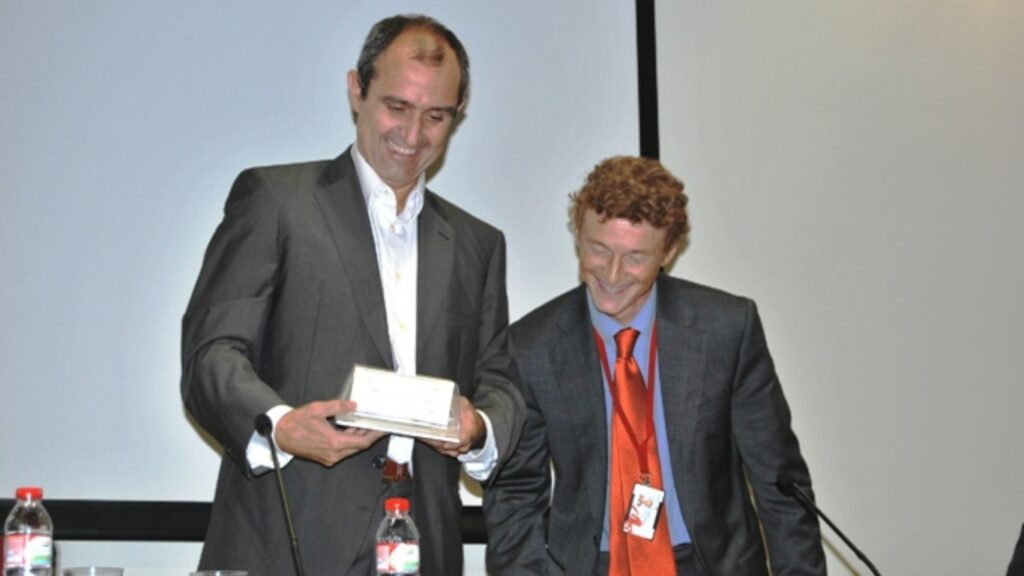 In an auditorium filled to capacity in the Duran Reynals hospital, the IDIBELL CEO, Emilia Pola, presented on Friday September 21st the new institute Scientific Director, Josep Manuel Menchón, and the Director of Strategic Projects, Manel Esteller, which will officially incorporate on October 1st. At the end of the session, Gabriel Capellá, who has headed for the past four years the Scientific Direction, was cheered by the professionals.

The CEO opened the event noting that it was “a day of good news, because we start new things.” The CEO thanked the partners’ representatives (Health Ministry, Bellvitge University Hospital, Catalan Institute of Oncology and University of Barcelona), who sat in the front row, having passed over in the scientific management and the creation of the new position of Director of Strategic Projects during the last meeting of the Board of Trustees, held last July.

Then Pola recalled the functions of the Scientific Director, stated in the statutes of IDIBELL, and explained with more detail the functions of the Director of Strategic Projects, a new position “very useful in these turbulent and strange times.” The CEO stressed the opportunity of the choice of Dr. Esteller for this post, which “will help to seek new sources of funding for research projects.”

Then Pola call the next chief scientist to speak. Dr. Menchón promised to be “very accessible to all researchers” and stressed the importance of linking research and assistance, because “the research gives quality to assistance and the assistance justifies the work of our research.” Dr. Menchón committed to maintain excellence and stressed the importance of “positioning ourselves for when times are better.”

Unlike the other participants, Manel Esteller addressed attendees from the lectern (“I speak better standing up”, apologized), first thanking the trust placed in him by the IDIBELL Direction. “I got to IDIBELL in 2008 and I have never regretted having come” he said. Esteller explained that “now is the time to join efforts”, and this is only possible if we understand IDIBELL as “a common house with many sensitivities”. The researcher said that he will take place initiatives to help increase the visibility and the internationalization of the institute, and to obtain alternative funding sources. The new Director of Strategic Projects ended his speech by referring to the director of ICFO, Lluís Torner, which he described as being a person who always sees the glass half full, “even if it is empty.” Manel Esteller confessed that shares this optimistic spirit.

The emotional highlight of the event came at the end when the CEO gave the floor to Gabriel Capellá. The Scientific Director for the past four years gave words of thanks to Emilià Pola for his confidence and to all researchers on campus. He also referred to Xavier Corbella, former managing director of the Bellvitge University Hospital and former chairman of the IDIBELL Executive Committee, thanking him for his support. Capellá had words of appreciation for the Collegiate Scientific Direction, previous to his appointment, in 2008, and of which he was a member along with Isabel Fabregat, Josep Maria Grinyó, Josep Maria Arnau and Carles Solsona. Gabriel Capellá also highlighted the work of Marga Nadal, his right hand for much of his term, which, as he joked, “made you think I was doing a lot of work.” Finally, Dr. Capellá specially thanked the work of the TTO.

The previous Scientific Director expressed his joy to see “where IDIBELL is now” and expressed his satisfaction that the institute “is now closer to clinical investigators” than four years ago. Capellá ended noting that IDIBELL has the opportunity to be “even stronger than it is now.”

After the speech, Emilià Pola gave him a gift, a tribute plaque with the inscription “In appreciation to Dr. Gabriel Capellá for his work as Scientific Director of IDIBELL from 2008 to 2012, from the partners, researchers and all IDIBELL staff.” Attendees closed the event with a long applause.