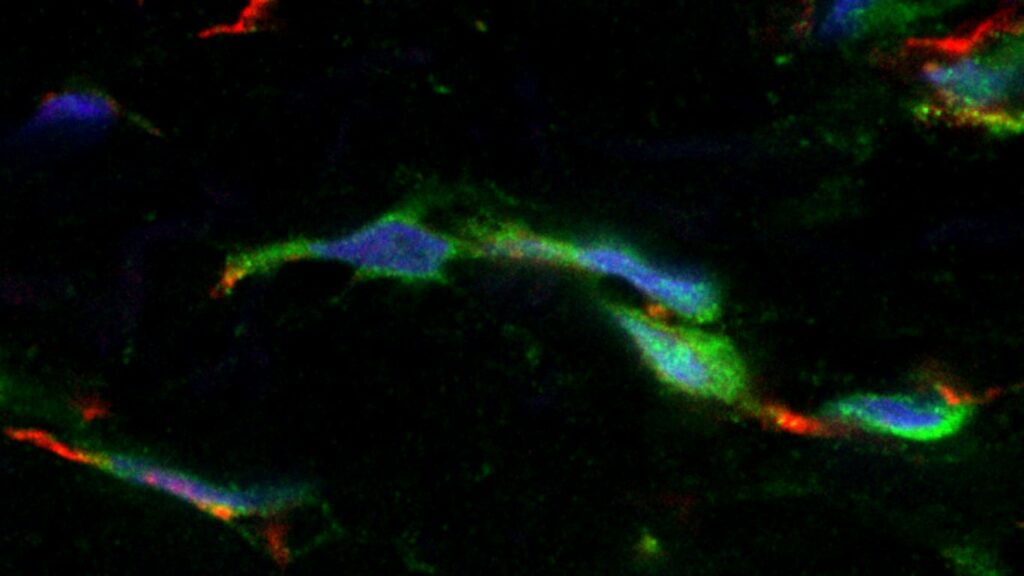 Researchers from IDIBELL, the Bellvitge University Hospital, the Universitat Autònoma de Barcelona (UAB) and the Hospital del Mar, coordinated by the latter two institutions, have identified the presence of an ALS biomarker in the skin of the patients. This specific protein, TDP-43, is present outside the nucleus of skin cells of patients. The presence in the skin of an elevated number of cells with this abnormality allows to predict with high reliability whether the patient has the disease or not, besides its progression.

The research, published in the journal Cells, has analyzed skin samples of patients with ALS from the Bellvitge University Hospital and the Hospital del Mar. The results were compared to those of ten healthy subjects and ten other patients suffering from other neurodegenerative diseases with chronic neuroinflammation component. The researchers studied the presence of TDP-43 protein in skin cells, since this protein is found in all of the body cells and is basic for developing their functions, outside the cell nucleus, i.e. in the cytoplasm. It is known that its presence outside the nucleus in the motor neurons of the brain and the spinal cord is seen in 97% of ALS patients.

The researchers were able to determine that the TDP-43 protein had also abandoned the cell nucleus in a large amount of skin cells of the ALS patients analyzed, using small skin biopsies. This was different from the samples of the subjects in the control groups. In the analyzed skin layers, the ALS patients presented more fibroblasts with this disease marker, which is normally seen in the spinal cord and the motor cortex, when compared to the members of the control group both healthy and with other pathologies. In addition, skin samples from ALS patients were taken again one year later, thus certifying that this situation continues to exist to the same extent, regardless of the evolution and progression of the disease.

Specifically, this anomaly is seen in one of every four skin tissue cells (in 24.1% of fibroblast cells) of ALS patients, while it is almost non-detectable in healthy individuals or in those with other neurodegenerative diseases. As the researchers highlight, “now we have a biomarker that works as a fingerprint of this disorder in the nervous system, and we also confirmed that it can be found in the skin. Moreover, we can quantify it and be able to give a diagnosis in some specific cases”. They add that “it is probable that this marker, in pre-symptomatic stages, before having any initial motor manifestations, could be already present and thus its relevance for diagnosis”.

Today, this tool can help in cases of difficult diagnosis or in people with a family history of ALS who present mutations in the genes that can cause the disease. In any case, further studies are needed, with more patients, to certify that this new biomarker can be used to speed up the diagnosis of the disease.