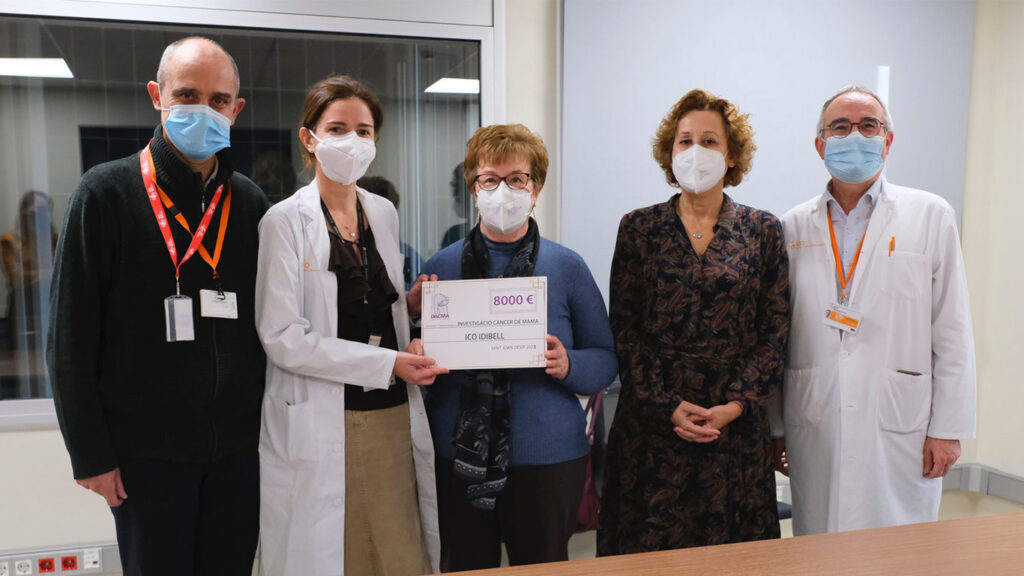 The Association of Women with Breast Cancer (DACMA) has donated a check for 8,000 euros to IDIBELl and ICO dedicated to breast cancer research. This donation counted on the participation of Belén García, the mayor of Sant Joan Despí, where DACMA has its headquarters, who wanted to accompany the entity members in this event.

The patients were received by the ICO l’Hospitalet’s territorial director, Jordi Trelis, and the IDIBELL director, Gabriel Capellá, who thanked them for their involvement and collaboration in research for fighting this disease. The medical oncologist specialized in breast cancer at the ICO l’Hospitalet, Sònia Pernas, has been in charge of explaining the project where this money will be invested and has reiterated her gratitude to the association.

Besides, both the organization’s president and the mayor of Sant Joan Despí, have highlighted their involvement in the fight against this disease, which has somehow closely affected all members of the entity.

This organization has currently more than 120 members in the city of Sant Joan Despí and its purpose is to support all those people who have suffered from this disease.

Share on Facebook
Share on Twitter
Share on Linkedin
Share on Email
Tweets by @idibell_cat
Tags: Breast cancer, Cancer, Molecular Mechanisms and Experimental Therapy in Oncology Program - Oncobell, Sin categorizar,
Manage Cookie Consent
To provide the best experiences, we use technologies like cookies to store and/or access device information. Consenting to these technologies will allow us to process data such as browsing behavior or unique IDs on this site. Not consenting or withdrawing consent, may adversely affect certain features and functions.
Manage options Manage services Manage vendors Read more about these purposes
View preferences
{title} {title} {title}
Scroll to Top