“VacunAcció: how to immunize against misinformation” concludes its first edition

The new initiative of the Escolab program with IDIBELL and the Virolai school has ended this June with very original proposals. 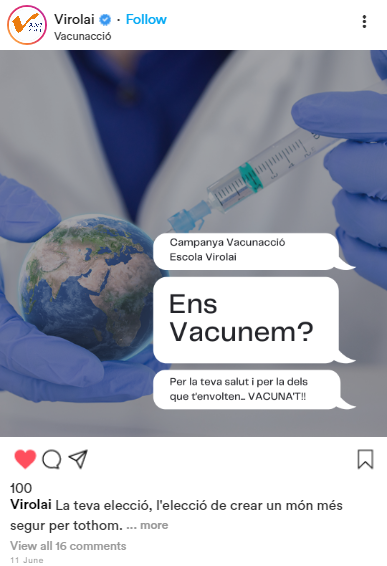 On Wednesday June 16, the pilot project developed by the Escolab program of the Barcelona City Council, together with IDIBELL and the Virolai School of Barcelona, ended. The activity has lasted two months and has created awareness-raising proposals on the importance of vaccination.

Precisely at a time when, as a result of the COVID-19 pandemic, anti-vaccine and denial movements have undergone a major revival, the project has been very well received by students. During several virtual sessions, the students have learned about the origin of vaccines, the various types of vaccines that exist and how to find truthful information to avoid unverified information. The awareness-raising proposals resulting from the project have focused on the various age groups of the population and have proposed different channels to disseminate the messages. Posters, posts for social networks, a video for children and a rap dedicated to teenagers have been the ideas that, after working on them as a team, the students have presented.

A large group of researchers from the infection and cancer research group of the Bellvitge Biomedical Research Institute (IDIBELL) and the Catalan Oncology Institute (ICO) have been involved in the project, formed by Beatriz Serrano, Raquel Ibañez, Jon Frias-Gómez, Álvaro Carmona and Claudia Robles, which has been coordinated by Dr. Marisa Mena. Participants were 4th ESO students and their teachers from the Virolai school in Barcelona. The IDIBELL Communication Unit and the EscoLab team have been responsible for promoting and evaluating the first edition of this project, which is also a pilot test.

The activity has been based on project-based learning and has ultimately sought to enhance the critical spirit of students and equip them with tools that allow them to differentiate between alarmist, conspiracy or “alternative” messages that defend ideas that have not been proven, and facts and evidence about the efficacy of vaccines. The ultimate goal of the project was to promote that citizens have their own criteria, capable of identifying and refuting messages without scientific basis.

The VacunAcció project is structured in a series of activities based on reflection and discovery, the autonomous work of the students, the creation of groups of experts for debate, the design of a study to find out if their close environment has a negative perception of vaccines and their effects, the acquisition of tools to search for reliable information and, finally, the elaboration of a clear and defined final product that has a direct impact on the society to which they belong: an awareness campaign against anti-vaccine movements, or in favor of vaccines.

In view of the success of the project, the intention to repeat it during the next year and to open it to other educational centers is on the table.