Science and performing arts against stereotypes 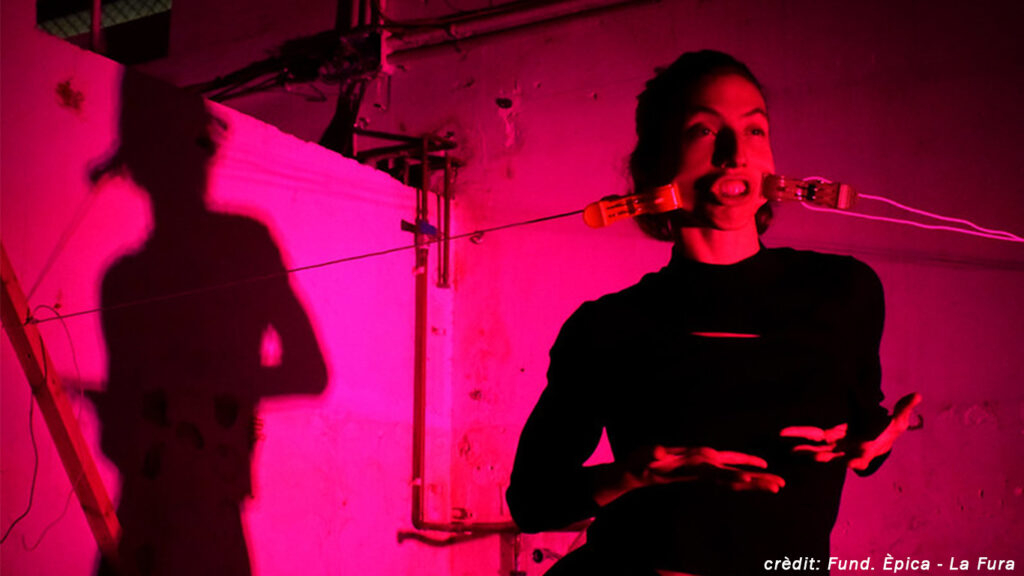 Stereotypes are knowledge structures integrated in our world representation, which have an influence on our decisions and which are hard to change. A team from the Bellvitge Biomedical Research Institute (IDIBELL) and the Faculty of Psychology of the University of Barcelona (UB), in collaboration with the Èpica Foundation – La Fura dels Baus analysed how a performing experience could have a positive impact in reducing the population’s bias against physical illnesses. This performing experience is a pioneer one for it combines scientific training and theatre performance in the same working platform.

The study, published in the journal Frontiers in Psychology, shows that the participation in a 14-day performing arts program reduces these implicit cognitive biases. According to the researchers, these results shed light on the development of strategies with performing arts to help treat this social problem in the general population. Participants in the study are Josué García-Arch (IDIBELL-UB), as first signatory, and Lluís Fuentemilla, both researchers at the IDIBELL Cognition and Brain Plasticity Unit and the Institute of Neurosciences of the UB (UBNeuro).  Other signatories of the article are Cèlia Ventura-Gabarró, from the Pompeu Fabra University, and Pedro Lorente and Pep Gatell, from the Èpica Foundation – La Fura dels Baus.

The challenge of modifying stereotypes

Previous studies show that representation structures from which stereotypes derive are malleable, but achieving a change through an intervention is very difficult. “Studies in cognitive neuroscience indicate that a memory (or representation structure) can be altered if it reactivates efficiently in the brain. Also, if the memory goes with emotional context, this can increase the reactivation-derived change”, notes Lluís Fuentemilla, coordinator of the study.

“On the other hand, ─continues the researcher─, we also know that people tend to understand and integrate how others are if we are able to simulate them as if we were them”.

Èpica Foundation has designed a performing experience that has these elements: the ability to simulate artistically a concept through performing arts developed om a context of intense emotion. The participants were sixteen amateurs, selected of the activity, who had to prepare a theatre play on several illnesses. With this objective, for two weeks, they received advice from experts on cancer and degenerative disorders from the Germans Trias i Pujol Research Institute (IGTP), who helped them to take in the disease and understand it from a multi-dimensional perspective (physiological, psychological, social impact, etc.). For instance, after these exchanges with the researchers, they simulated the daily life of patients with degenerative diseases or the life of the caregivers. The activity ended with a public performance in front of more than 300 people.

“This work protocol gathers many features that enable us to think that the activation of knowledge structures that are the basis for stereotypes could make them malleable: emotion, continuity and first-person experience. These features are hard to work with under laboratory conditions or different practices in other programs, since they limit the motivation and commitment of the participants in the task, therefore hardening the chance to make reliable changes in the implicit bias at an individual level”, notes Lluís Fuentemilla.

The effects of the intervention were measured with the implicit association test (IAT), an experimental task that allows the calculation of how long it takes for an individual to associate an item, for instance, with a word or an image, and a conceptual category: the longer the reaction, the harder it is to establish a link between concepts. “For instance, we know it takes longer to link an image of someone playing sport to the idea of “bad” than the “good” category, and the contrary happens wit the image of someone who wears a hospital patient robe. This difference in the reaction time shows we have an integrated “good” and “bad” category associated with a category linked to “healthy” and “ill” people, a phenomenon that, as expected, we found in the actors before the workshop”, notes Josué García Arch, researcher of the project.

Once the program ended, the differences in reaction time had decreased in the participants, showing that the allocation of these ideas had decreased as well. Also, this reduction did not happen in two control experiments carried out on people of the same age, sex and education levels. One of these groups received the same scientific and medical information but without the arts, and did not show a change in the reaction time regarding the initial test. “This response shows that the experience provided by the performing activity was essential to reduce the negative stereotype towards ill people”, note the researchers.

A potential strategy to treat other prejudices

These results shed light on the development of strategies based on this performing experience to treat problems related to stereotypes in the general population. “The way in which society faces stereotypes is based on education-derived processes and awareness in order to prevent these knowledge structures from being created. However, the problem of stereotypes is that this knowledge is attached to many situations of our society and coping with this in education is not enough. The presented protocol of the study enables us to open the way to reverse this problem using performing arts”, states the researcher.

Moreover, according to the authors of the study, tis protocol could be used to treat other problems. “In this case, we have worked on the stereotype associated with the disease, but the program enables us to treat any stereotype, race or gender for instance, using the theme of performing arts”, notes Lluis Fuentemilla.

This study emerges in the frame of the platform created by Èpica Foundation, in which performing arts, science and technology are grouped to create new knowledge. The objective of this initiative is to create a performance based on research questions by the researchers to create results from the interactions between creatives, scientists and the audience. “Knowledge can be learnt through language and experiences, and performing arts have both. In addition, in the language of FURA, which prioritizes the interaction with the audience, the experience is lived by actors, creators and the audience at the same time. Therefore, in our space, we can create realities that the audience can feel as real, and therefore, their reaction will be more spontaneous than in a laboratory or in a test carried out by research groups in the workshop”, note the members of Èpica Foundation.

The IDIBELL-UB team has taken part in two workshops: Information vs Memory, where they analysed the impact of this show on memory, and Complex Systems, the origin of this project. Moreover, it is also part of the European Performing Science Night project, co-funded by the Marie Skłodowska Curie actions, and led by the Èpica Foundation, which will apply the same work methodology. The result will be the different dissemination activities that will take place in Badalona in September 2021 as part of the European Researchers’ Night.

Share on Facebook
Share on Twitter
Share on Linkedin
Share on Email
Tweets by @idibell_cat
Tags: Cognition and Brain Plasticity, Neuroscience Area, Neuroscience Program,
Manage Cookie Consent
To provide the best experiences, we use technologies like cookies to store and/or access device information. Consenting to these technologies will allow us to process data such as browsing behavior or unique IDs on this site. Not consenting or withdrawing consent, may adversely affect certain features and functions.
Manage options Manage services Manage vendors Read more about these purposes
View preferences
{title} {title} {title}
Scroll to Top