IDIBELL has held a meeting with the best Healthtech projects 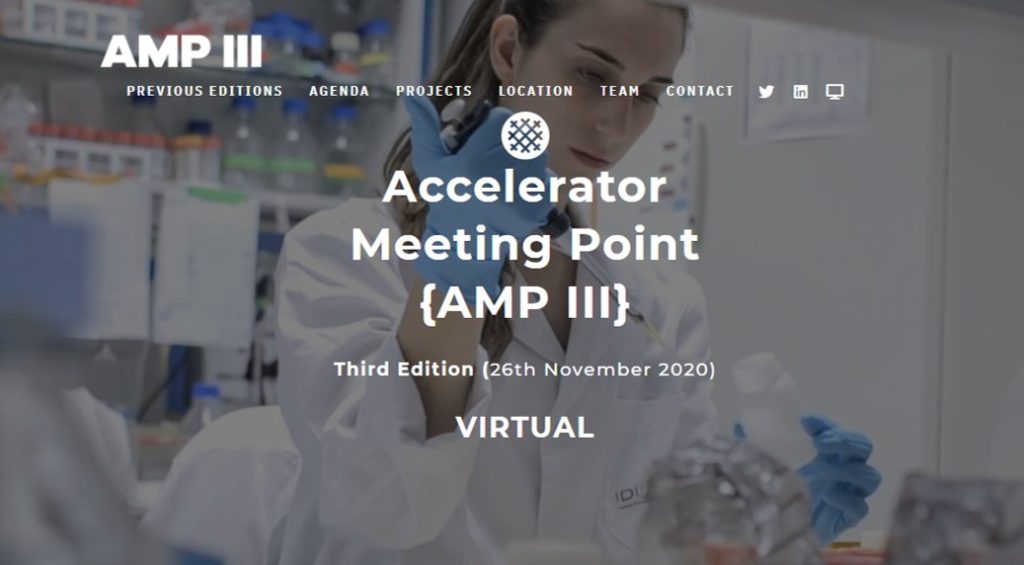 The most innovative technology projects in the healthcare sector were presented this November 26th at the third edition of the Accelerator Meeting Point (AMP) (https://amp.idibell.cat/), organized by the Business Development and Innovation Area of ​​the Bellvitge Biomedical Research Institute (IDIBELL). An event that this time has been held virtually to ensure the safety of all participants. The digital meeting allowed different IDIBELL entrepreneurs and invited entities from the HealthTech/Biotech sector to espouse their projects to investors and pharmaceutical companies to obtain financing.

Biotechnology and health-related science companies have had an impact on the Spanish economy of almost 7,000 million euros (0.7% of GDP) and have generated 92,384 jobs (Asebio Report 2018). A sector in which Catalonia is also the leader in the number of companies, national turnover, and the production of knowledge in the biotechnology sector.

This conference helps to bring the technology developed by IDIBELL researchers and invited researchers from other institutions of the Mediterranean axis to society, thanks to the preferential access that specialized investment companies in the health and pharmaceutical sector have had to these projects of innovation.

Among the 20 projects that participated in the Accelerator Meeting Point III is Angiotheragnostics (AtG), an investigation by Dr. Oriol Casanovas from IDIBELL that identifies the mechanisms of resistance to anticancer therapies based on antiangiogenic treatments and facilitates the development of new molecular treatments and predictive biomarkers.

Also, APTADEL, a project focused on Ewing’s Sarcoma, a type of bone cancer that mainly affects children and young adults, and that is very aggressive and resistant to chemotherapy. Through this project directed by Dr. Oscar M. Tirado from IDIBELL, the aim is to reduce certain proteins that facilitate the cancer tumor’s ability to metastasize in the patient.

And, PURPOSE, a project focused on a new immunomodulatory agent with increased anti-inflammatory potency and tolerogenic activity by Dr. Josep Maria Aran from IDIBELL. This new molecule is focused on the treatment of inflammatory bowel disease (IBD), although its effect on other autoimmune diseases such as lupus nephritis or rheumatoid arthritis is also being studied.

More than 20 companies from the sector participated in the virtual meeting: 12 venture capital companies and investors, 7 pharmaceutical and biotechnology companies, and 3 regulatory and consulting agencies as a panel of experts to assess the feasibility of the projects and obtain their valuable feedback.

Among the companies participating in the panel of experts, this third edition stands out for the presence of international investors, such as Aurora Science and Gimv. At the local level, we could have the feedback from an investment fund such as In vivo Capital Partners or Canaan Research and Investment, as well as from DDR at the regulatory level.

To reinforce the Alliance for Innovation and Industralització del Eje Mediterráneo (AIISEM), the third edition of the AMP also featured the participation of the following research centers and institutions: IIS La Fe, INCLIVA, FISABIO, ISABIAL, IISPV, IdisBa , IDIAP, and IMIB.

To develop the online meeting in the best possible way, the organization divided the conferences into two rooms. In each of them, 10 projects were presented according to their state of development. Also, the guests were divided into two rooms, the first dominated mainly by investors and, the second, highlighted by the presence of companies from the biotechnology and health sector.

At the end of the project presentations, investors and companies selected those proposals with more interest to schedule a B2B meeting.

In this way, and thanks to the impulse of these new projects, the collaboration between researchers and companies is developed, positioning IDIBELL as a leader in innovation in Spain. According to Raquel Egea, Director of the IDIBELL Business Development and Innovation Area, “the number of projects and the growing interest of potential investors in each edition, confirms the demand for greater collaboration between researchers and companies to develop projects that represent an improvement in the welfare of society ”.

Project with the co-financing of: