New results on the function of the tumor suppressor HERC protein 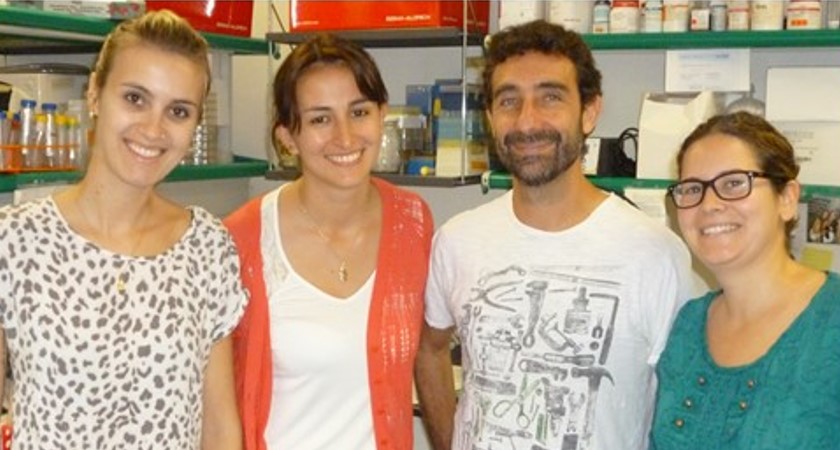 The RAF protein could be a therapeutical target to treat the tumor growth in regulated pathways by the p38 protein, according to a new study published in the journal Scientific Reports by a team of experts of the Faculty of Medicine and Health Sciences of the UB and the Bellvitge Institute for Biomedical Research (IDIBELL). The study analyzes the mechanisms that regulate some molecular signaling pathways related to carcinogenesis and tumor progression and opens new perspectives to the fight against human cancer.

Among the participants in the new study, led by Professor José Luis Rosa, are the researchers Leonardo Pedrazza, Taiane Schneider, Ramon Bartrons and Francesc Ventura, from the Department of Physiological Sciences of the UB and IDIBELL.

How does HERC1 ligase regulate the activation of ERK and p38 kinase?

The p38 protein, which belongs to the family of mitogen-activated kinase (MAP or MAPK kinase), is a factor with a distinguished role in the response to cellular stress signals and the control of proliferation and progress of tumor cells.

MAPK proteins and the regulator kinases –MAPKK and MAPKKK– take part in intracellular signaling cascades such as the RAF/MEK/ERK pathway, which controls the essential cell processes (growth, proliferation, differentiation, survival and cell migration). Dysfunctions in the regulation of these molecular signaling pathways can alter the physiological cycle of the cell and therefore generate the tumor proliferation and growth.

The published study in the journal Scientific Reports describes for the first time how the HERC1 enzyme –ubiquitin ligase- is able to regulate the process of cell migration through the MKK·/p38 signaling pathway, regulated by the C-RAF factor. The new study expands the knowledge on the tumor-suppressor role of HERC proteins (ubiquitin ligase); enzymes that regulate the function of some proteins involved in processes such as cell growth and proliferation through its molecular marking with ubiquitin molecules (ubiquitination). In particular, the new study reveals HERC1 ligase i sable to regulate the activation of ERK and p38 kinase through the union of ubiquitin molecules with the C-RAF factor.

According to the authors, the discovery of an unexpected communication between RAF proteins and MKK3/p38 pathway opens new perspectives regarding future therapeutical targets in the fight against human cancers.

Moreover, the research group has a distinguished experience in the study of HERC proteins and their link to several pathologies (cancer, ataxia, etc.). In previous studies, the team contributed to the functional characterization of two ubiquitin kinases –HERC1 and HERC2 (Frontiers in Oncology, 2019)— and the description of the role of HERC1 ligase in the regulation of the cell proliferation through the activation of the ERK signaling pathway through a mechanism that affects ubiquitination and degradation of C-RAF (Oncotarget, 2018).

In another study, which was published in the journal Molecular Oncology, the experts of the UB and IDIBELL stated that Mdm2 protein –the main regulator of the p53 protein, tumor suppressor–, is part of the ternary complex known as p53-HERC2-NEURL4. The authors of this study are the experts Jesús García Cano, Susana Sánchez Tena, Joan Sala Gaston, Agnès Figueras, Francesc Viñals, Ramon Bartrons and Francesc Ventura, under the supervision of Professor José Luis Rosa.

In tumor processes, tumor cells do not respond to molecular signals that can inhibit its proliferative growth. The protein p53, which is coded by the TP53 gene, is a transcription factor that regulates the expression of genes related to the DNA reparation, genomic stability, inhibition of cell cycle progression, senescence and apoptosis (cell death).

In more than 50% of human cancers, the TP53 gene is mutated and generates a non-functional protein p53 that induces proliferation and growth of tumor cells. The active form of p53 is constituted by a tetrameter of four identical sub-units, and the levels of the protein are strictly regulated by the Mdm2 ubiquitin ligase. In a negative retro-alimentation circuit, the genic expression of Mdm2 is transcriptionally regulated by p53.

According to the new study, the Mdm2 enzyme is also part of the complex p53-HERC2-NEURL4, so a decrease of HERC2 levels also reduces the expression of the Mdm2-carried ARN and therefore, its transcription. When the DNA is damaged by the effect of the bleomycin chemical-therapeutical agent, the Mdm2 protein disassociates from the complex p53-HERC2-NEURL4 and increases the phosphorylation and acetylation of the protein p53 bound to HERC2 and NEURL4.

The study also states that the Mdm2 promoter –which contains response elements to p53- competes against HERC2 for the union of p53, a feature that could explain the role of HERC2 in the regulation of the p53-Mdm2 circuit, and therefore, its function in the molecular mechanisms of tumor suppression.

Share on Facebook
Share on Twitter
Share on Linkedin
Share on Email
Tweets by @idibell_cat
Tags: Cell signalling and bone biology, Molecular Signalling in Cancer, Nutrition, metabolism and Gene Therapy , Preclinical and experimental research in thoracic tumors, Traslacional Medicine,
Manage Cookie Consent
To provide the best experiences, we use technologies like cookies to store and/or access device information. Consenting to these technologies will allow us to process data such as browsing behavior or unique IDs on this site. Not consenting or withdrawing consent, may adversely affect certain features and functions.
Manage options Manage services Manage vendors Read more about these purposes
View preferences
{title} {title} {title}
Scroll to Top