A clue to the pathophysiology of LCA12, a congenital form of inherited blindness 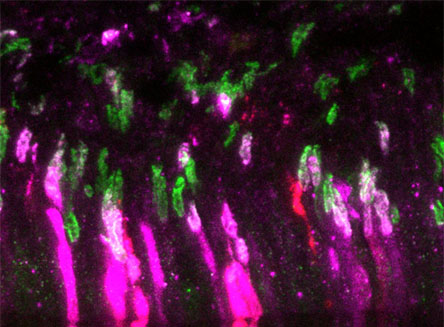 The term “light-equivalent disorders” usually refers to inherited retinal dystrophies in which mutations ultimately lead to the permanent closure of cationic channels at the plasma membrane of rods and cones.  This leads to a sustained hyperpolarized state of photoreceptor cells, and a chronic decrease in calcium levels, in much the same way as a constant exposure to bright light would do.  This state results in photoreceptor cell death, retinal degeneration and blindness.

The team of Dr. Ana Méndez at the Biomedical Research Institute of Bellvitge (IDIBELL), and the University of Barcelona Health Science Campus of Bellvitge had already pointed to the calcium sensor GCAP proteins as putative mediators of cell death in these disorders in previous studies.

Leber Congenital Amaurosis 12 (LCA12) is one of those “light equivalent” disorders. It is caused by loss-of-function mutations in the RD3 gene, that ultimately cause the closure of channels and a sustained drop in intracellular calcium. This study shows that ablating GCAPs expression in animal models of LCA12 results in a substantial delay of retinal degeneration. Photoreceptor cell death is largely prevented by removing the proteins that sense the drop in calcium.

This study shows that in a context of permanent low calcium, GCAP proteins are blocked in their active state and are retained at a wrong compartment of the cell.  From this compartment, GCAPs act on some molecular target that ultimately triggers endoplasmic reticulum stress and apoptosis. While targeting the GCAP proteins is not a therapeutic option for LCA12, as GCAPs are required for photoreceptor cells to respond to light, the study unveils a novel mechanism of damage at which a non-negligible number of retinal dystrophies could converge.  Future studies will focus at identifying therapeutic targets in this pathway, to delay retinal degeneration in these disorders.

Share on Facebook
Share on Twitter
Share on Linkedin
Share on Email
Tweets by @idibell_cat
Tags: Cellular and molecular basis of sensory disorders, Neuroscience Program,
Manage Cookie Consent
To provide the best experiences, we use technologies like cookies to store and/or access device information. Consenting to these technologies will allow us to process data such as browsing behavior or unique IDs on this site. Not consenting or withdrawing consent, may adversely affect certain features and functions.
Manage options Manage services Manage vendors Read more about these purposes
View preferences
{title} {title} {title}
Scroll to Top