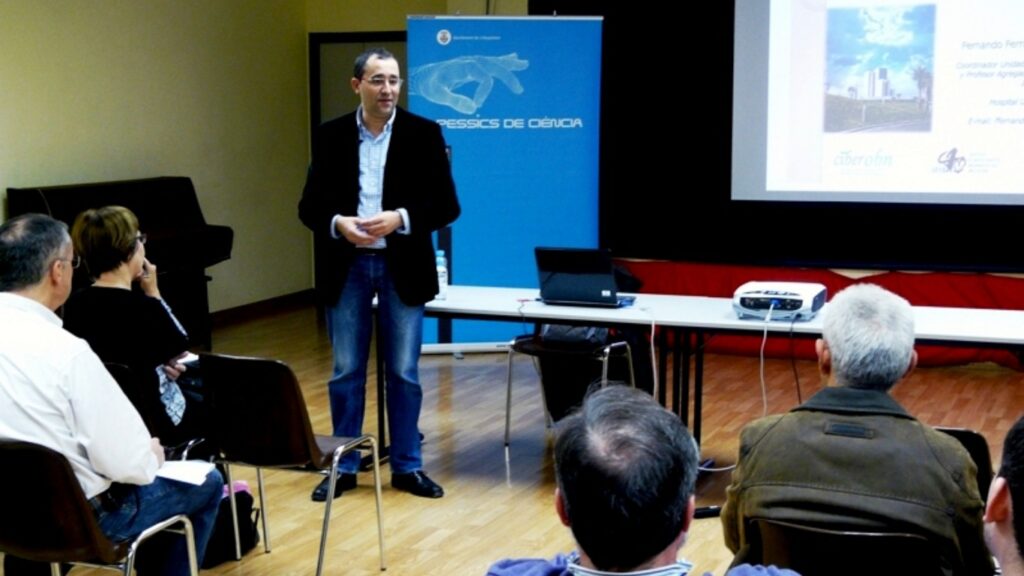 Eating behaviour disorders are not mental but nutritional problems. Although it has been repeated many times in television series, reports and journal articles, it seems that not everyone is quite clear about this fact, judging from the face of disbelief of some of those attending the talk by Fernando Fernández Aranda at Centre Cultural Sant Josep de L’Hospitalet de Llobregat (Barcelona) on November 22nd. Fernandez Aranda is the head of the Unit of Eating Disorders at the Bellvitge University Hospital and researcher at the Psychiatry and Mental Health Group of IDIBELL. His talk was scheduled in the cycle Pessics de Ciència of Centre Cultural Sant Josep, with the collaboration of IDIBELL, and it was part of the events of the Science Week.

Eating disorders include various conditions that have in common the alteration of eating conduct and, often, a distortion of body image and compulsive behaviours. The best-known conditions are anorexia and bulimia, although Fernández Aranda warned at the conference that “we are seeing more and more other disorders in our patients” such as binge eating disorder (compulsive food overconsumption without later compensation by vomiting or doing excessive exercise) or bigorexia (exaggerated concern by physical conditions). The profile of affected people has also changed, as the expert explained. In front of the classic profile of adolescent girls, “we are seeing more and more men and adult women”. The approach to these cases is often more difficult, probably because “they go more unnoticed and arrive later to the doctor’s office”.

The causes of these disorders are genetic, psychological and social, according to the doctor, and the disease often occurs by the combination of the three. The Bellvitge specialist was concerned about the increasing of childhood obesity, because, he warned, “it is a risk factor for suffering an eating disorder in adulthood”.

Despite the importance that it is usually given, Dr. Fernandez Aranda minimizes the effect of advertising on the onset of eating behaviour disorders. “Advertising is a reflection of the attitudes and the ideas of society”, he said, “and the obsession with physical beauty is very present in today’s society, although we can find evidences fifty or sixty years ago”.

The expert warned that some of the beliefs present among us are simply false. He cited, for example, the belief that sugar and fat in normal amounts are more fattening than other energy sources, or when someone starts to gain weight it is difficult to stop getting stout. The specialist said that our metabolism is capable of regulating itself and therefore it is not easy to lose or gain weight, as dieters know well. It takes a lot of willpower and a persevering attitude to get it.

The Eating Disorders Department at the Bellvitge University Hospital attends each year about 400 new cases. The most serious ones require hospitalization. There are third-level hospitals, as Bellvitge Hospital, that have a day hospital where individual and group therapy sessions are conducted by a multidisciplinary team. After, a periodical medical surveillance is made in the doctor’s office. Being a mental illness, the approach of eating diseases should be undertaken with psychological or psychiatric intervention programs. Treatment is long and it requires the involvement of family and friends of those affected.

The good news is that eating behaviour disorders can be cured. “Unless very severe cases, even physical damage suffered by many patients are reversible”, the specialist explained. “One of the things that makes me most excited is when former patients come to see me to introduce their children”, finished with a smile Fernandez Aranda.