Susana Jiménez Murcia: ”gambling becomes an addiction when it goes from being a hobby to a necessity” 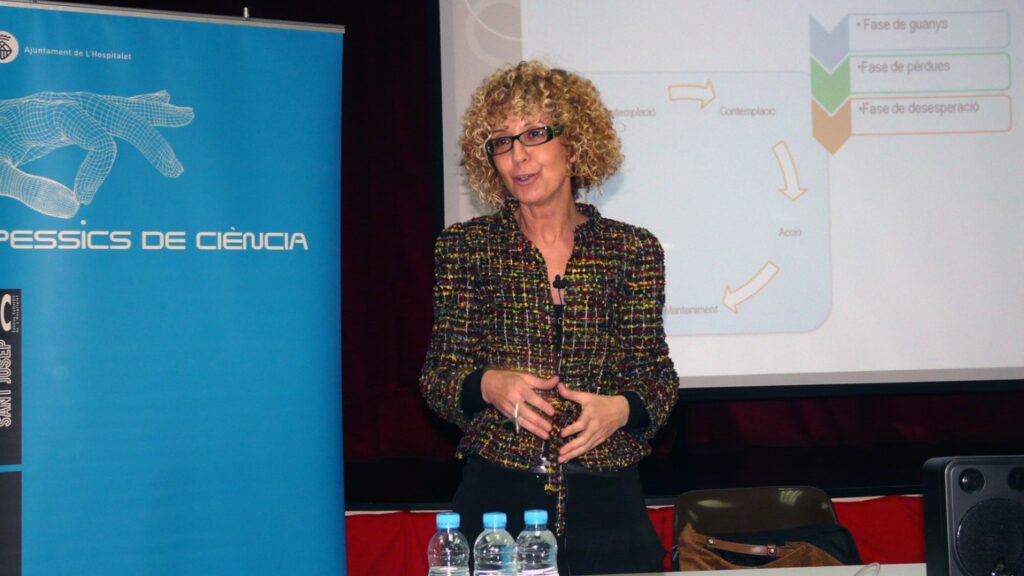 Gambling and addiction to information and communication technologies, which are encompassed within the generic term of behavioural addictions, is an increasing health and social problem. The head of the Pathological Gambling Unit of the Bellvitge University Hospital and IDIBELL researcher Susana Jiménez-Murcia spoke on November 20 about gambling and addiction to technology at Centre Cultural Sant Josep at L’Hospitalet de Llobregat. The event was co-organized by IDIBELL and is part of the activities of the Science Week 2012.

The specialist in behavioural addictions expressed concern about the proliferation of Internet gambling, that, warned, have increased the number and the severity of the cases. “Before, those affected took four or five years to have serious social and economic problems, but Internet gambling have made these problems appear within less than a year.”

Gambling addiction often begins with a stage in which the affected obtains mainly profits, after losses begin to accumulate and, finally, there is a stage of desperation. The game comes to seriously affect personal relationships, economy and health of those affected. “gambling becomes an addiction when it goes from being a hobby to a need and ends moving daily activities such as work, studies, relationships with others, and even basic activities like eating,” explained Jiménez Murcia.

Although these behavioural addictions are very heterogeneous, the specialist said that people addicted to gambling or technological devices often have a common psychological profile: low self esteem, low tolerance for failure and frustration, among others. Except for people addicted to social networks, those affected often are introverted and manifest depressive symptoms, although “it remains unclear whether problem gambling is a consequence of a depression or vice versa,” explained the expert, but she has observed that in most cases the depression appears as a result of addiction.

To help affected to control their impulses, the team led by Dr. Jiménez Murcia, along with the Eating Disorders Unit at Bellvitge Hospital and specialists from other European centres joined in the Playmancer consortium have developed a therapeutic game. The game, called Islands, interacts with the patient’s emotions through biosensors. The aim of the videogame is to leave from an island. The game detects the voice and facial expressions and physiological reactions of the user. This allows the patient’s emotional reactions to influence the development of the game. The user just moves forward in order to leave the island if reacts with self-control to the situations.

The therapeutic game is being used as a complementary tool for the common psychological treatment in compulsive gambling patients. The unit headed by Dr. Jiménez Murcia includes the therapy game sessions as part of the cognitive-behavioural treatment, which also implies the involvement of patient’s family and friends in the recovery process. During the conference, the specialist explained that the treatment response is quite positive, more than in the case of the non-behavioural addictions, although many patients, especially those addicted to technological devices, are not aware of having a problem and often go to the hospital pushed by the family.

The head of the Pathological Gambling Unit of Bellvitge explained that behind the addition there are biological, psychological and social factors affecting the incidence of these disorders and also conditioning their approach. Susana Jiménez Murcia was concerned about the ease of access to applications and games that have brought Internet and mobile devices, which has increased pathological cases. “Now, according to epidemiologic studies, up to 38% of young people have a problematic use of Internet” the expert warned.

During the talk, Dr. Jiménez Murcia explained that, like those addicted to drugs or alcohol, resolved gamblers never can play again. Instead, this is virtually impossible in the case of the addiction to the Internet or other technologies that are ubiquitous in our daily lives. In this case, they are taught to use these tools responsibly.