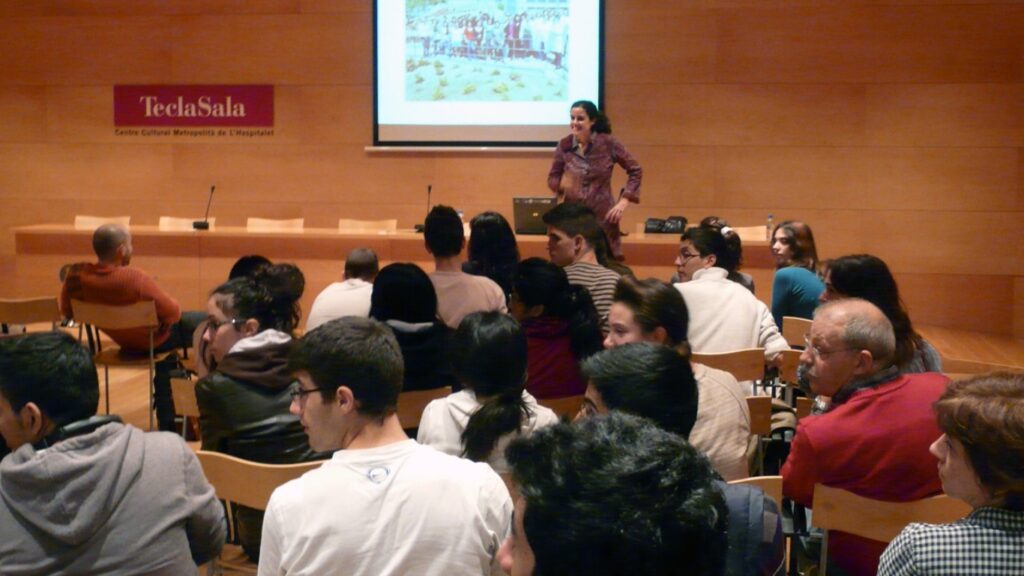 Working capacity, curiosity, creativity, ingenuity, passion and lots and lots of perseverance. This is is the recipe to be a good researcher, according to Laura Valle, a researcher at the IDIBELL Hereditary Cancer group during a conference held on November 16 in the library Tecla Sala at L’Hospitalet de Llobregat, Barcelona, in a room full mainly of high school students. The talk was organized by the Cultural Centre of L’Hospitalet de Llobregat and IDIBELL, and it was part of the cycle Pessics de Ciència and of acts of the seventeenth Science Week.

Laura Valle started talking about the steps to become a researcher: the training process, the way the excellence is evaluated, the scientific method and the qualities of a good researcher. Dr. Valle demystified the image of researchers as ​​bizarre, lonely, old and ugly that often appears in the films. She then spoke about his field of study, hereditary cancer, and specifically about the hereditary forms of colorectal cancer. Valle ended the talk emphasizing that the research is a team effort and citing, as an example, the diversity of professionals working in the research group of hereditary cancer.

Share on Facebook
Share on Twitter
Share on Linkedin
Share on Email
Tweets by @idibell_cat
Tags: Cancer, Hereditary cancer , Molecular Mechanisms and Experimental Therapy in Oncology Program - Oncobell, Outreach and education,
Manage Cookie Consent
To provide the best experiences, we use technologies like cookies to store and/or access device information. Consenting to these technologies will allow us to process data such as browsing behavior or unique IDs on this site. Not consenting or withdrawing consent, may adversely affect certain features and functions.
Manage options Manage services Manage vendors Read more about these purposes
View preferences
{title} {title} {title}
Scroll to Top