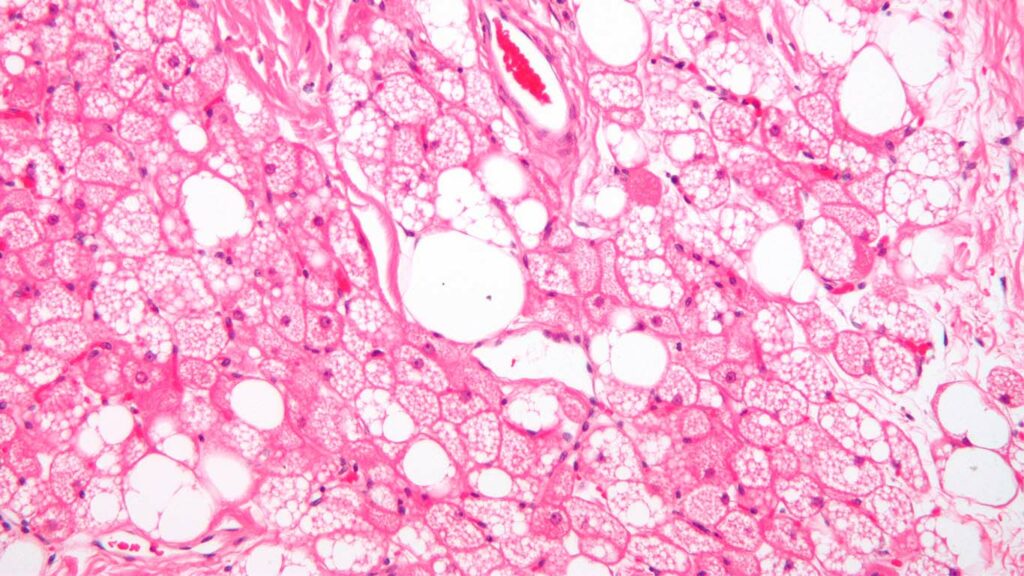 Obesity is a global health problem. One of the most recurrent therapeutic strategies is to stop the expansion of adipose tissue (body fat) at the moment when precursor stem cells proliferate and transform into adipose cells. The S6K1 protein plays an indispensable role in this process.

A study led by the Bellvitge Biomedical Research Institute (IDIBELL) and the Girona Biomedical Research Institute (IDIBGI) has evaluated the effects of a drug that inhibits the activity of the S6K1 protein to assess its therapeutic potential in the treatment of obesity. The results, published in the scientific journal JCI Insight, show that mice fed a very high-fat diet and treated with this anti-tumour agent, tosylated LY3584703, showed, compared to mice that were not treated with the drug, a lower body weight, less accumulated fat and smaller adipocytes (preferred cell of fat deposits).

In addition, the beneficial effect was observed in other disorders typically associated with obesity, such as fatty liver or dyslipidaemia (excess cholesterol or triglycerides in the blood): “another very interesting effect is that the drug manages to mitigate the accumulation of fat in the liver, and also reduces hypertriglyceridaemia, the excess of triglycerides circulating in the blood”, says Dr. Francisco José Ortega, the researcher. Francisco José Ortega, the principal investigator of the Nutrition, Eumetabolism and Health research group at IDIBGI and the CIBER of the Physiopathology of Obesity and Nutrition (CIBEROBN) who has led this work.

“These results make a convincing approach to the clinic, and demonstrate that the oral administration of a compound specifically directed against the S6K1 protein can improve the obese phenotype and the comorbidities typically associated with this condition,” concludes Dr. Ortega.

This study derives from the line of research developed twenty years ago by Dr. Sara Kozma and Dr. George Thomas, both IDIBELL researchers. These authors demonstrated that mice that do not have the gene responsible for the S6K1 protein can eat a lot without getting fat or suffering metabolic problems.

In addition to IDIBELL and IDIBGI, researchers from Cardiff University and Newcastle University (UK), the University Hospital of Regensburg (Germany), and the Minerva Foundation Institute for Medical Research (Finland) have participated in this study, which has been partially funded by the Foundation La Marató de TV3 in 2016.

Share on Facebook
Share on Twitter
Share on Linkedin
Share on Email
Tweets by @idibell_cat
Tags: Cancer, Gynaecological Cancer , Metabolism and Cancer, Molecular Mechanisms and Experimental Therapy in Oncology Program - Oncobell,
Manage Cookie Consent
To provide the best experiences, we use technologies like cookies to store and/or access device information. Consenting to these technologies will allow us to process data such as browsing behavior or unique IDs on this site. Not consenting or withdrawing consent, may adversely affect certain features and functions.
Manage options Manage services Manage vendors Read more about these purposes
View preferences
{title} {title} {title}
Scroll to Top