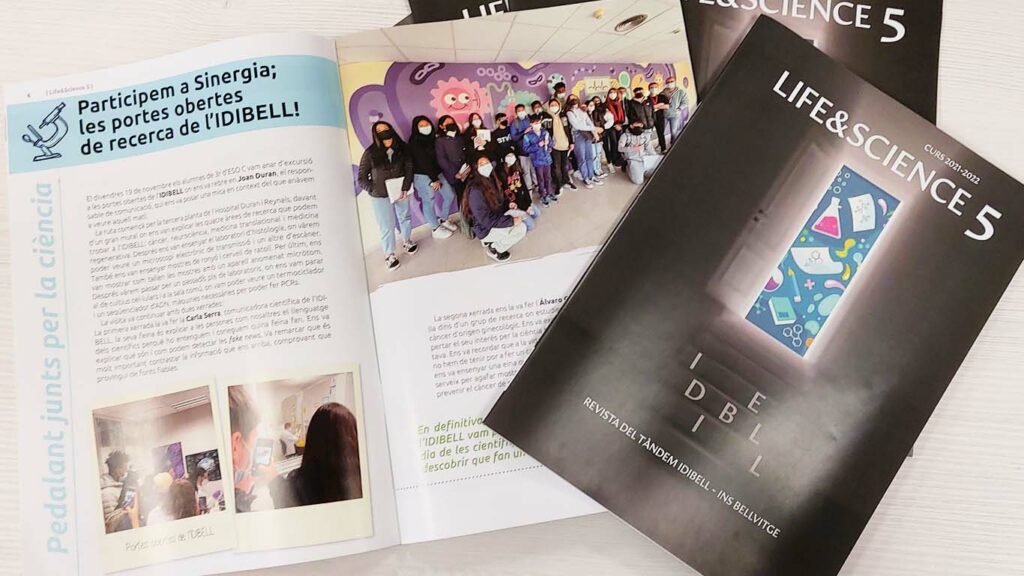 The educational tandem formed by the Institut Bellvitge and IDIBELL has closed the 2021-2022 academic year with the publication of the fifth issue of Life & Science magazine, the project carried out by 3rd year ESO students and which includes, among other content related to science, all the activities that, during the school months, the educational center carries out with researchers and professionals from IDIBELL.

During the last few months, students and teachers have participated in two singular projects promoted by IDIBELL. In the first place, all the 1st ESO students have been involved in workshops, both for introduction and implementation, of the STARS GAME project, of the ERASMUS+ program, which IDIBELL carries out jointly with three European scientific institutions and with students from Italy, Slovenia and Germany. This project, based on the gamification of science education, is creating a digital escape room through which students are challenged to undertake scientific research by putting themselves in the shoes of scientists from various fields of biomedicine. On the other hand, the 4th ESO students participated in a pilot test for the implementation of a didactic unit on addictions to online gambling, called What do you play? The initiative, promoted by the Audiovisual Council of Catalonia with the participation of the IDIBELL and Bellvitge Hospital Psychoneurobiology of Eating Disorders and Addictive Behaviors research group, aims to provide tools for the proper use of technology and video games, and detect problematic behaviors among adolescents.

During the course, the URIB (Institut Bellvitge Research Unit) project has also continued, which consists of the creation of laboratory practices inspired by the research areas of IDIBELL. The last practice has had the participation of Dr. Antònia Viñals, from the TGF-beta and cancer research group, who has answered to an extensive interview on cell biology. Along with an audiovisual montage made by the students, Dr. Viñals’ interventions have been integrated into the introductory video of the practice. Also part of the educational project was a visit by the students on the occasion of Synergy, the IDIBELL open week, and the involvement of the artistic high school students in the production of five audiovisual pieces from the Women of Science series of the Aula L’H TV show, from L’Hospitalet television.

Within the framework of the Tandem, the 1st year high school student Paula Barrios carries out her Research Work under the co-tutoring of Dr. Ruth Rodríguez-Barrueco, researcher of the Gynecological Cancer research group, and Elvira Fernández, professor at the Institute. During the summer months, the student will spend a stay in the laboratory, where she will study endometrial cancer and targeted therapies that allow us to attack cells that accumulate damage to their DNA.

All these activities are reflected in the magazine Life&Science, whose latest issue also includes an extensive students interview with Dr. Mar Martínez, veterinarian and researcher in the Tumor Angiogenesis group, current vice-president of the Animal Experimentation Ethics Committee of the IDIBELL. The interview reflects on the use of animals in research and the strategies to follow to guarantee their well-being and reduce the number of individuals used as much as possible.