Manel Esteller, ”if the alphabet is genetics, spelling is epigenetics” 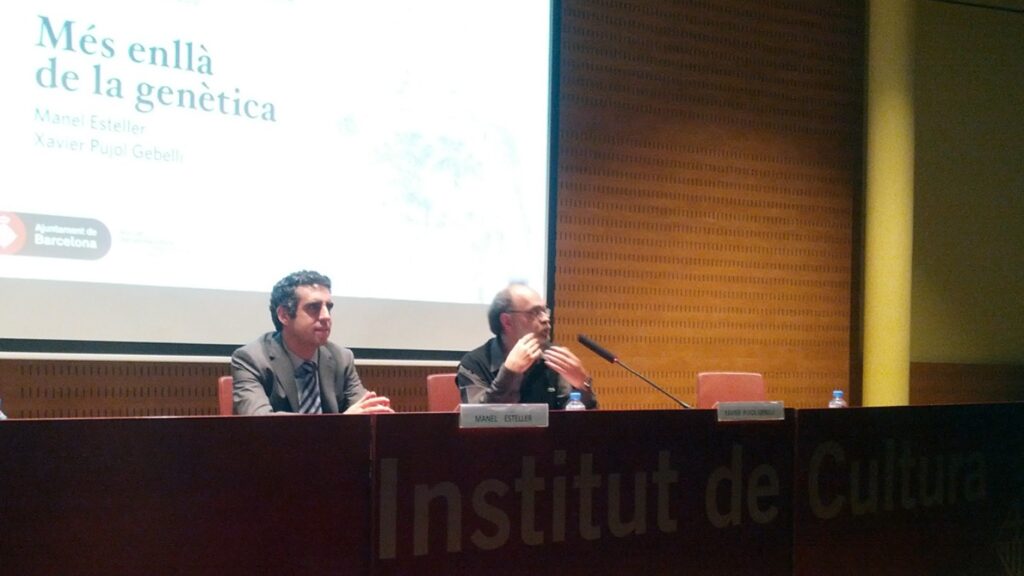 Why don’t identical twins have the same disease at the same time? Why do two cats who share the same DNA have different spots? Why do teenagers have mood changes? The answer is in epigenetics, the discipline that deals with the genetic regulatory mechanisms that do not involve changes in the DNA sequence.

The director of the Epigenetics and Cancer Biology Program and Director of Strategic Projects at IDIBELL, Manel Esteller, spoke about Epigenetics on November 21st at the Palau de la Virreina, Barcelona, ​​in the cycle of science gatherings organized by the City Council of Barcelona, ​​which has enjoyed the cooperation of IDIBELL and CRG.

The science journalist Xavier Pujol Gebellí gave the floor to Dr. Esteller. The expert started talking about epigenetic precursors: Darwin and natural selection, Mendel and genetics, Lamarck and the neck of giraffes. Also a dark character, Dr. Lysenko, in the Stalinist USSR, who came to ensure that after cutting the tail to mice generation after generation, finally descendants ended up with no tail. This, of course, was false. Acquired characters only pass to the next generation if they affect germ cells, as Conrad Waddington, considered the father of modern epigenetics, explained.

The cloning of the sheep Dolly, announced in 1997, showed that we are more than our genes. Dolly was obese and suffered from arthritis and diabetes, unlike its genetically identical mother. The explanation was in epigenetics. “There are things that go beyond the DNA”, said Esteller. “These things are the chemical marks that switch in and off the genes, and we know that Dolly had problems in switching in and off its genes, it had chemical markers, epigenetic marks, that were different from her mother’s.”

The IDIBELL researcher compared the genetics with a text without punctuation nor accents, nor cases, just a series of letters, one beside the other. Epigenetics is what would give meaning to the text. There are several epigenetic marks, the best known of which is methylation, which involves the addition of a methyl chemical group in a section of DNA that disables certain genes. The epigenome, i.e. the set of epigenetic marks, change much during life, which does not happen with the genome.

Esteller gave several examples to explain the effect of epigenetic changes: the propensity to obesity in people who suffered hunger during World War II, the hair colour of mice fed with a diet rich in folates or biological differences that appear between identical twins. “If only the DNA were important, identical twins should develop cancer or lupus at the same time, which is not the case”, said the researcher. Esteller confessed that police agencies had been in touch with him to collaborate in solving crimes in which people who had participated had a twin brother, but “we do not participate on it, because we already have enough work.”

Epigenetics is behind many diseases. The researcher gave the example of cancer, which has genetic and epigenetic origins. Esteller called it “one of the ugliest diseases, because it’s like an accelerated evolution, adapts its epigenetics and its genes to attack the immune system or the chemotherapy”. The expert spoke about drugs and diagnostic systems based on epigenetics that are already being used in cancer treatment. But, in addition to cancer, there are other diseases in which epigenetic alterations occur as various genetic syndromes, psychiatric diseases, neurodegenerative diseases such as Alzheimer’s and cardiovascular diseases.

The epigenome changes as we grow older. Esteller referred to a recent study coordinated by the group showing, from the comparison of the epigenome of babies and centenarians, how it is degraded during life, making us more susceptible to disease. Dr. Esteller warned that these changes increase with tobacco or alcohol consumption, or with an unhealthy diet. “The good news is that drugs are being tested that are capable of reversing epigenetic alterations associated with age”, concluded the researcher.