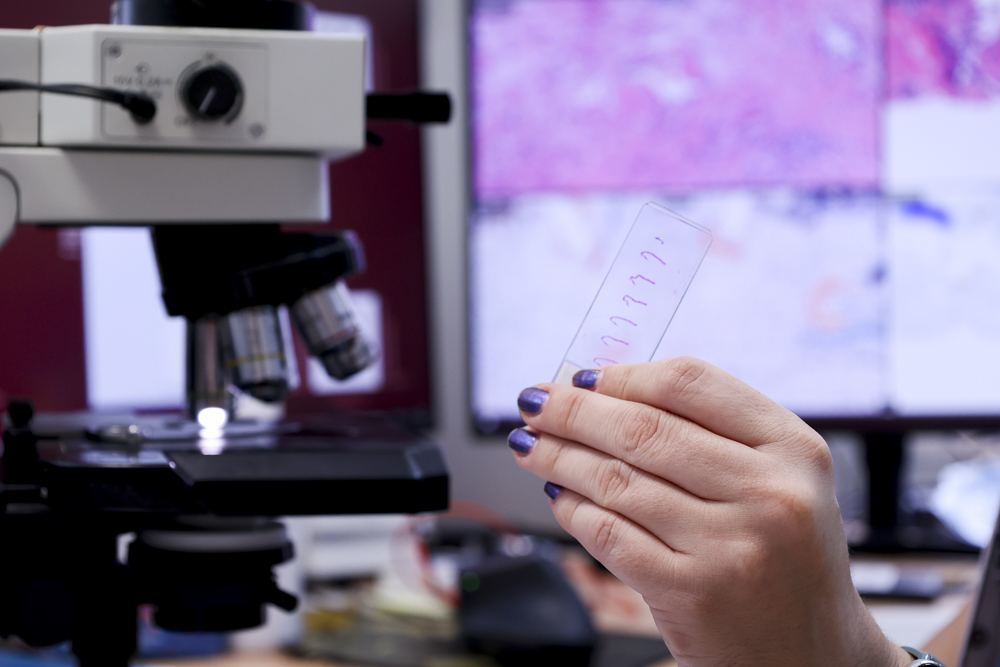 Amyloidoses are a group of diseases in which different types of proteins fold abnormally and are deposited in the tissues compromising their function. These deposits can be local or systemic.

TTR amyloidosis (due to Transthyretin protein deposition) is considered the most frequent form of systemic amyloidosis associated with aging. Known as senile cardiac amyloidosis, we now know that deposits can be found in various organs and tissues, years before cardiac symptoms appear.

Early diagnosis of this form of systemic amyloidosis is difficult because its main symptoms often overlap and are confused with normal manifestations of aging.

An investigation led by Dr. Maria Pané and Dr. Enric Condom, from the HUB Pathological Anatomy Service and IDIBELL researchers, in which the hospital’s Radiology, Urology, and Internal Medicine services have also participated, has confirmed that the prostate is one of the tissues in which amyloid is deposited in cases of systemic amyloidosis (especially of the TTR type), something that has been little known until now.

The authors incidentally found minimal amyloid deposits in prostate biopsies from 40 patients, out of thousands of biopsies performed for suspected prostate cancer between 2001 and 2022. The immunohistochemical study confirmed the finding and determined the type of amyloid in more than 80% of cases. The majority corresponded to TTR amyloid. Only four of the patients had a previous diagnosis of systemic amyloidosis (all of them were not TTR).

By reviewing the medical records of patients in whom amyloid deposits had been detected, the authors of the study, which has been published in the journal Histopathology, found that all had at least one of the symptoms described as characteristic of TTR systemic amyloidosis: bilateral carpal tunnel syndrome, hearing loss and osteoarticular problems (tendinopathies, lumbar canal stenosis, osteoarthritis), among others.

This is the largest series published to date by patients diagnosed with amyloidosis in the prostate. As explained by Dr. Maria Pané, principal investigator of the work, “the potential clinical impact and the benefit that we can obtain from this incidental diagnosis is important, because an undetermined percentage of patients with TTR systemic amyloidosis end up developing heart disease, which if it is diagnosed and treated early, it allows a significant improvement in the quality of life and survival of patients”.

In addition to showing that the prostate is a target tissue for amyloid deposits, the work also disseminates among professionals the clinical picture of TTR systemic amyloidosis, which presents all with musculoskeletal and neurosensory symptoms and emphasizes that not all patients with this form of amyloidosis have cardiac involvement.

Additionally, the usefulness of reviewing any biopsy sample in patients with suspicious symptoms of systemic amyloidosis is recalled, to detect amyloid deposits that would have gone unnoticed, explains Dr. Pané.