Identified a possible biomarker for the appearance of stones in cystinuria 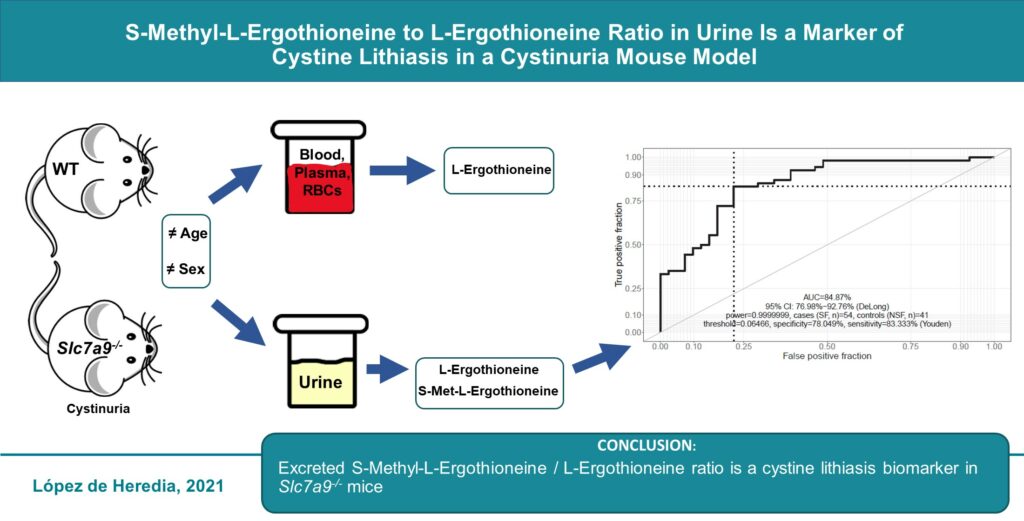 A new study identified a possible biomarker for the appearance of cystine stones in the urinary tract in a murine model of cystinuria. Cystinuria is a rare disease characterized by recurrent episodes of stone formation that can cause a progressive decrease in kidney functions, which affects the quality of life of those patients and can lead to kidney failure.

Patients with cystinuria usually combine episodes of stone formation (lithiasis) with others without stones. On many occasions, the stones are removed by surgical interventions, with an average of one surgery every three years.

The presence of cystine stones in patients is regularly monitored by various techniques such as crystalluria (detection and analysis of crystals in urine) or the determination of urine ability to dissolve cystine and various imaging procedures (X-rays, ultrasound, CT, …). All these methods have a limited predictive capacity in the case of cystine stones.

For all this, it is necessary to have new, reliable, and simple markers for routine clinical practice. The markers can determine the presence of cystine stones in advanced lithiasic stages or even predicting their appearance. Its existence would allow patients with cystinuria to access treatments in the initial stages.

This new biomarker is based on the quantification of two compounds in the urine. Also, it can detect cystine stones in mouse models regardless the sex or age.

Cystinuria is a rare genetic disease characterized by the presence of cystine stones in the urinary tract and affects 1 in 7,000 people. Cystine stone formation (lithiasis) accounts for between 1 and 2% of all kidney stones and about 6-8% of pediatric ones. It is caused by a defect in the amino acid transporter responsible for reabsorbing cystine, arginine, ornithine, and lysine. Although this transporter is found both in the intestine and in the kidney, the consequences are more evident in the latter since the aforementioned amino acids are not reabsorbed and are excreted in high amounts in the urine. Precisely one of them, cystine, due to its low solubility at the physiological pH of urine, precipitates forming cystine stones in the urinary tract.

Share on Facebook
Share on Twitter
Share on Linkedin
Share on Email
Tweets by @idibell_cat
Tags: Genes, Disease and Therapy Program, Human Molecular Genetics, Translational Medicine Area,
Manage Cookie Consent
To provide the best experiences, we use technologies like cookies to store and/or access device information. Consenting to these technologies will allow us to process data such as browsing behavior or unique IDs on this site. Not consenting or withdrawing consent, may adversely affect certain features and functions.
Manage options Manage services Manage vendors Read more about these purposes
View preferences
{title} {title} {title}
Scroll to Top