Xavier Bosch: “If a person has doubts about whether they should be vaccinated, what we have to do is resolve these doubts” 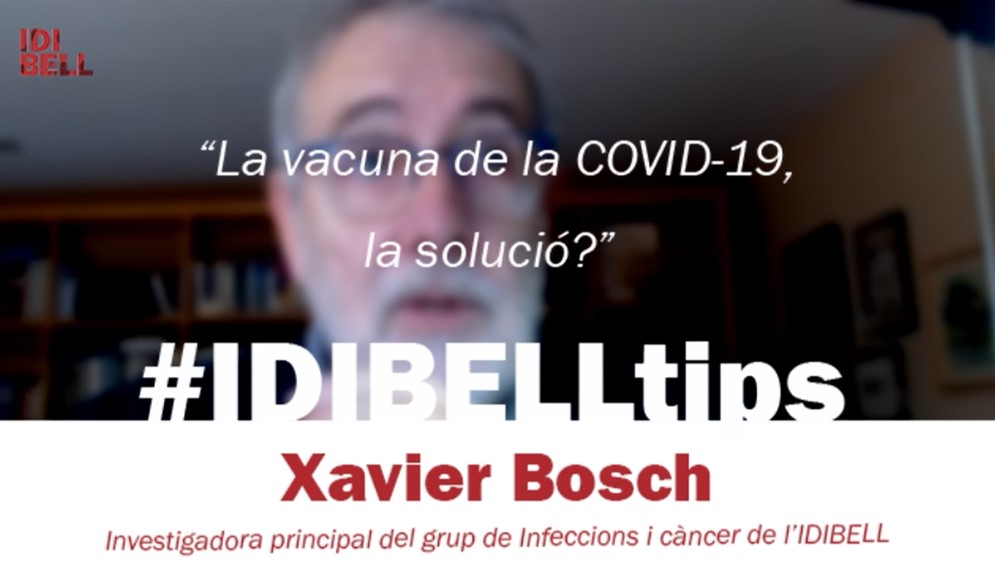 A single virus has been able to spread all around the world in a few months and almost paralyze the country’s economy for a whole year: SARS-CoV2. During this time, we have accumulated restrictions, and elements such as facemasks have become essential. However, the threat of a fourth wave is real and, while we find a definitive cure, vaccines are the most feasible solution to control the epidemic. Unfortunately, despite the undeniable need, there are doubts about whether current vaccines are safe or effective.

We spoke with Dr. Xavier Bosch, principal investigator of the IDIBELL infection and cancer research group, doctor at the ICO, professor at the UOC, and expert in the vaccine against HPV (human papillomavirus), on the challenge of large-scale vaccination against COVID-19 and the reticence that this whole process is generating.

Dr. Bosch says that exists a part of the population that, due to the fast vaccine development, doubts whether all the necessary stages have been covered, and says that the answer is “absolutely yes, they are safe and effective.” The design of the new vaccines has been done in accordance with the experience with other previous coronaviruses. In addition, there has been unprecedented international scientific solidarity. Real-time results have been shared with the entire scientific community and vaccine safety and efficacy evaluation agencies. Another unprecedented event, which has accelerated the vaccine’s appearance, is that production began before the clinical trials were completed, so once they over, the vaccines were already available.

“If a person has doubts about whether they should be vaccinated, what we need to do is resolve these doubts,” says Bosch. Media, scientists and, institutions are doing a great effort to solve these doubts. Consequently, these efforts are reducing the resistance to vaccination to a minority. “The first groups vaccinated, the elderly and health workers, the decision not to get vaccinated is anecdotal,” he added, “certainly the first resistance is an initial reaction that will decrease as vaccination spreads.”

Still, Xavier Bosch warns that it is important to keep in mind that we are giving vaccination priority to the most vulnerable population, older people admitted to residences. These people have a very high mortality rate due to the associated pathologies. This means that they may die spontaneously as a result of these complications, independent of COVID-19. Therefore, it is important not to link these deaths to vaccination. “In the media, we must not allow false temporary associations to become side effects attributable to vaccines.”

“In the media, we must not allow false temporary associations to become side effects attributable to vaccines“

Bosch says a barrage of good news is needed, as in the case of Israel. In this country, 40% of the population is already vaccinated (at the time of the interview), and the information about its vaccination campaign will be used to illustrate the potency and capacity of these vaccines. Therefore, we will soon know the impact of vaccination on citizens, which will resolve doubts for those who still have some reticence.

The most important limitation of this vaccination campaign is the production of the vaccine, as we cannot produce enough to reach everyone at the same time. The lack of vials exhibits the huge socio-economic differences between countries. Thus, while some countries have already ordered vials to vaccinate two or three times their entire population, others only have vaccines for 20% of their people. “The richest regions, such as Europe or the United States, have already made their shopping lists, but now the problem is to produce enough vaccine to meet these demands,” says Dr. Bosch.

“The richest regions, such as Europe or the United States, have already made their shopping lists, but now the problem is to produce enough vaccine to meet these demands“

Finally, we must highlight the great technological progress of RNA vaccines. It is a vaccine model that has been studied for some years, and COVID has accelerated. Now, once the technology is developed, it will not only be useful in combating this pandemic, it will also be useful to treat other pathologies. And the same has happened with diagnostic techniques, we have started with PCR that took three or four days, to tests that you can do yourself, you have the result in hours, and you cover 80-90% of the PCR. This may also apply to many other pathologies in the future.