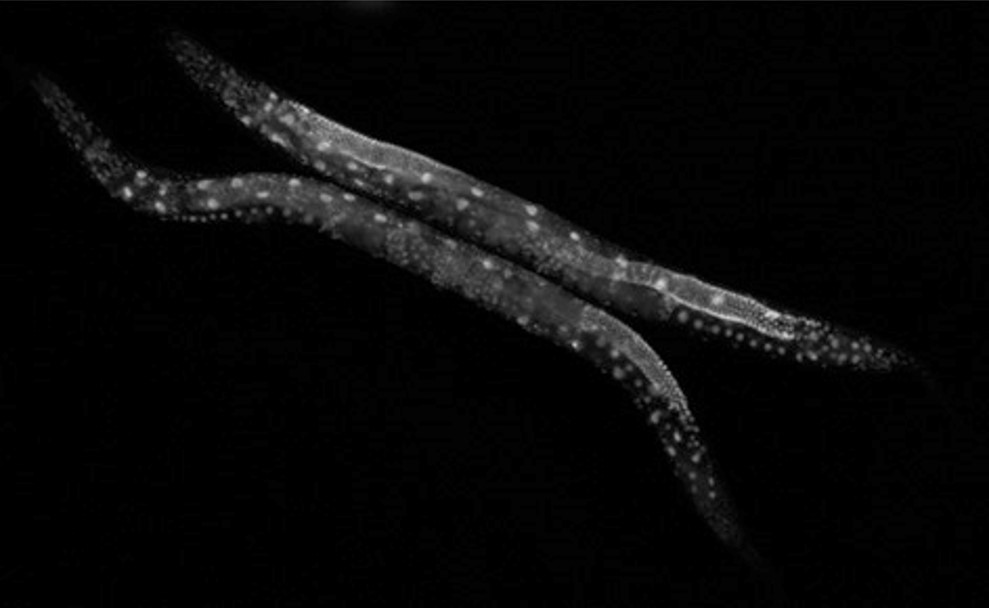 IDIBELL researchers have used gene-editing technology in C. elegans to reproduce human mutations that cause retinitis pigmentaria. With this method, they have studied factors that affect disease development and possible drug treatments.

Often, patients from the same family and carriers of the same genetic mutation, develop a disease differently. This disparity may be due to the existence of mutations in other secondary genes, which influence the onset and progression of the disease caused by the main mutation. As an example, members of a family who are carriers of the same mutation may show symptoms of the disease at age 20, and others at age 50. Knowing what factors influence the onset and development of the disease would help a better prognosis and the application of preventive treatments. Retinitis pigmentaria is a group of a genetic and degenerative diseases characterized by the loss of light-receptor cells in the retina, this causes a non-responder retina and a progressive vision loss.

Two researchers from Dr. Cerón’s group, Dmytro Kukhtar and Karinna Rubio-Peña, from Bellvitge Biomedical Research Institute (IDIBELL), have worked on this topic in the last few years. To do it, and by CRISPR gene-editing technology, they introduced in C. elegans worms, mutations that cause retinitis pigmentaria in humans. Next, these mutations were classified into two groups: those that caused an obvious problem to worms (eg sterility or smaller size) and those that did not.

Worms that were not affected by human mutations were used to search for other genes whose inactivation caused alterations in the mutant worms, but not in the control worms. Thus, up to three genes were identified as candidates to be disease modifiers, and in cooperation with the main mutation could be affecting disease progression.

On the other hand, those avatar worms to which the human mutation caused them a defect were used to look for drugs that would alleviate the negative effect of the mutation. The result was surprising because researchers identified drugs that were harmful to worms harboring patient mutations, but these drugs did not affect control worms equally. In this way, this study changes the paradigm of drug screens since although it is important to find drugs that cure, it is also relevant for health to identify those drugs that could be harmful to patients with certain genetic mutations.

This research work has been funded mainly by the Carlos III Health Institute (ISCIII) and the ONCE Foundation.