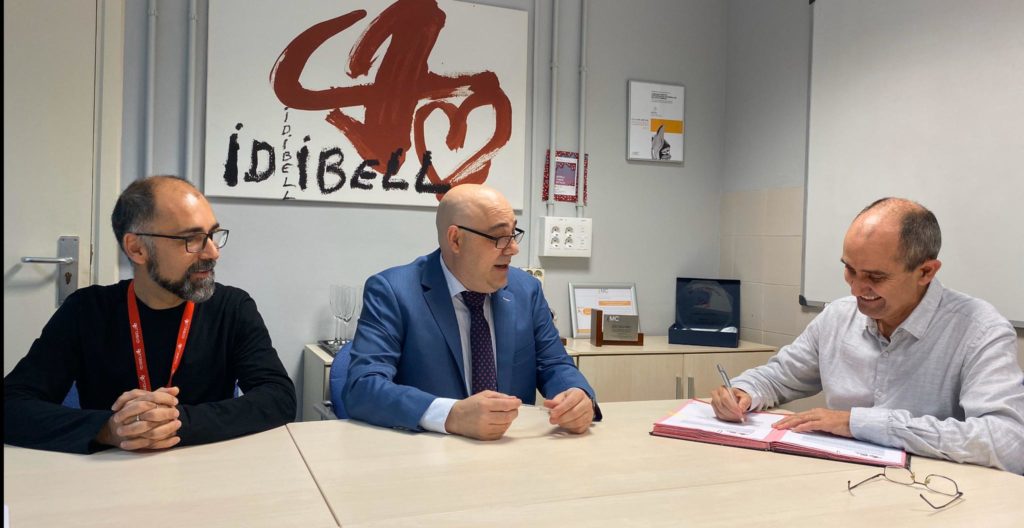 The Alba Pérez Foundation has signed a framework collaboration agreement with the Bellvitge Biomedical Research Institute that aims to support research projects related to Ewing’s sarcoma, an investigation led by Dr. Òscar Martínez-Tirado, head of IDIBELL’s Sarcomas group. Along the same lines, and making a new step forward, both entities have also signed a specific collaboration contract that is included under this framework contract. Through the latter, the Alba Foundation will finance a part of the development of a new treatment for patients with Ewing’s sarcoma, which means the creation of a spin-off company that must act as an investment vehicle. The future spin-off will help accelerate the research project and lead it towards the phase of clinical trials in humans. Following this translation process, scientific knowledge derived from years of efforts and search is expected to reverse the creation of a real treatment for Ewing’s sarcoma patients.

The signing of the contract has been materialized by the president of the Foundation, Rafael Pérez, the director of the IDIBELL, Dr. Gabriel Capellá, and the researcher responsible for the project that receives the funding, Dr. Òscar Martínez Tirado.

The Alba Pérez Foundation aims to raise funds for the creation of scholarships, grants or contracts and collaboration agreements with entities, both public and private, for research in the fight against childhood cancer and, especially, Ewing’s sarcoma. Ewing’s sarcoma is a soft bone tissue sarcoma that primarily affects children and young adults. It is very aggressive and highly metastatic; Approximately one third of patients have metastases at the time of diagnosis, with lung and bone marrow being the most common places.

Share on Facebook
Share on Twitter
Share on Linkedin
Share on Email
Tweets by @idibell_cat
Tags: Cancer, Sarcoma,
Manage Cookie Consent
To provide the best experiences, we use technologies like cookies to store and/or access device information. Consenting to these technologies will allow us to process data such as browsing behavior or unique IDs on this site. Not consenting or withdrawing consent, may adversely affect certain features and functions.
Manage options Manage services Manage vendors Read more about these purposes
View preferences
{title} {title} {title}
Scroll to Top