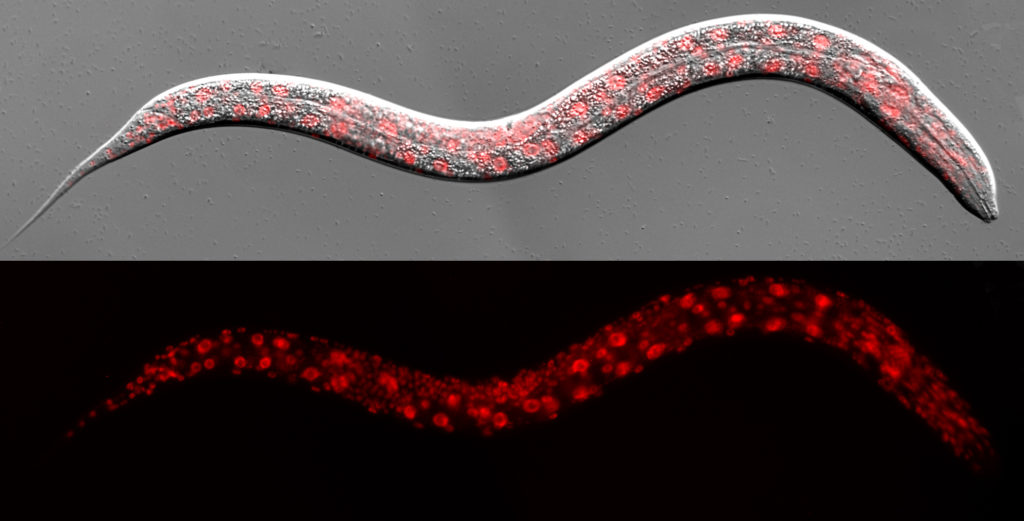 At first glance, a one-millimeter worm that needs to be observed with a magnifying glass does not resemble a human being at all. However, the nematode Caenorhabditis elegans, an animal model widely used in biomedical research by hundreds of laboratories around the world, has approximately the same number of genes that humans have, about 20,000. In addition, most human disease-causing genes have their counterparts, or orthologs, in C. elegans worms. Thus, for example, the human SF3B1 gene, which is mutated in different types of cancers, mainly in leukemia but also in some breast or prostate tumors, is very similar to the sftb-1 gene of C. elegans worms. In fact, when the amino acid sequence of the human SF3B1 protein is observed in its most cancer-affected regions, 89% of the amino acids are identical. Precisely, some of these amino acids conserved from worms to humans, including those that are mutated in some tumors.

A group of researchers led by Dr Julián Cerón of the Bellvitge Biomedical Research Institute (IDIBELL), has taken advantage of the similarity between these amino acids and their experience in CRISPR gene editing to mimic in C. elegans, the SF3B1 mutations found in tumors.

These investigations have allowed the use of worms to identify possible weaknesses or vulnerabilities of cancer cells carrying mutations in SF3B1. Thus, the researchers point to three other splicing factors, which work together with SF3B1 in the processing of messenger RNA, as targets for therapeutic molecules that kill cancer cells harboring mutations in SF3B1 but not normal cells. This research, which is part of the doctoral thesis of Xènia Serrat, and in collaboration with researchers from the Pasteur Institute in Paris, has just been published in the journal PLoS Genetics.

IDIBELL researchers have not only reproduced the mutations of cancer patients in worms, but they have also humanized the region of the SF3B1 protein that binds to Pladienolide B, a molecule from which drugs that are in clinical trials for the treatment of cancer have been derived. This advancement will allow the testing of more molecules derived from Pladienolide B, with the goal of selecting the most efficient as an anti-tumor agent.

Thanks to CRISPR technology, in which Dr. Cerón’s group is a specialist, the functional replacement of C. elegans proteins with their human counterparts will allow these humanized worms to be used as models for investigating the mechanisms of different diseases and use them as tools of prognosis, and as a platform for seeking new drugs in a fast, efficient, and ethically responsible manner.