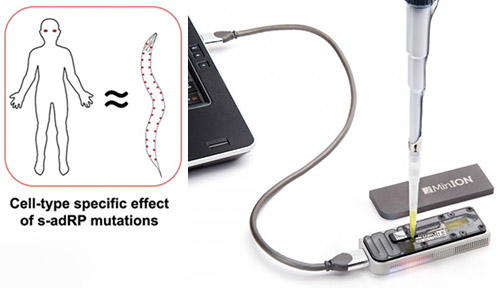 The ONCE and the Bellvitge Biomedical Research Institute (IDIBELL) have renewed their collaboration to carry out research on blindness and, this time, the Organization will give support to the study “Use of the MINION sequencer for identification of molecular tags caused by mutations in splicing factors that produce Retinitis Pigmentosa”, coordinated by researcher Julián Cerón Madrigal, also from IDIBELL.

Hereditary dystrophies of the retina are disorders with great clinical and genetic heterogeneity for which there is no cure today; 15,000 people in Spain suffer from them. To date, up to 150 genes involved in retinal dystrophy have been described, which shows the difficulty in addressing these disorders. The challenge is to design treatments to stop retinal degeneration and restore visual function, while gaining knowledge of the molecular and cellular processes altered by mutations in several genes.

The methodology of this study will be based on the use of the nematode Caenorhabditis elegans to approach the mechanisms of disease and use it as low cost pre-clinical model.

The recent CRISPR/Cas9 technique is revolutionizing biomedical research, as it facilitates “on-demand” edition of genomes. Using this technique, Dr. Cerón’s group has created animal models in which mutations of patients with retinosis have been reproduced, models that could be used to predict the effect of drugs on patients with certain mutations and to try new therapeutic strategies.

After more than 20 years of research, patients with Retinitis Pigmentosa (RP) can still not benefit from an efficient therapy. In addition, the knowledge generated about the mechanisms of the disease raised new questions due to the multifactorial nature of the disease. An analogy could be made with another well-known disease such as cancer: there is no single type of cancer, and therefore there are multiple mechanisms of disease and multiple therapeutic strategies. Similarly, RP is caused by mutations in very different genes, and therefore therapy options could be specific for each type.

The objective of this new collaboration is to integrate to the research line a state-of-the-art technology, which is the sequencing of DNA and RNA with nanopores by means of a sequencer called MINION. The main advantages of this technology are its portability, cost and the speed of sequencing. In fact, it is currently being used for the detection of Zika virus in populations with difficult access to other types of sequencers.

The project of Dr. Cerón’s group uses the MINION sequencer to investigate the molecular tags of a subtype of Retinitis Pigmentosa caused by certain genes that produce proteins for a cellular process called splicing. These factors or splicing proteins are extraordinarily conserved from humans to lower organisms such as the nematode C. elegans. The identification of these molecular tags could be used as an element of diagnosis and prognosis of the disease, as well as to develop alternative therapeutic strategies.

Share on Facebook
Share on Twitter
Share on Linkedin
Share on Email
Tweets by @idibell_cat
Tags: Genes, Disease and Therapy Program, Modeling human diseases in C. elegans , Traslacional Medicine,
Manage Cookie Consent
To provide the best experiences, we use technologies like cookies to store and/or access device information. Consenting to these technologies will allow us to process data such as browsing behavior or unique IDs on this site. Not consenting or withdrawing consent, may adversely affect certain features and functions.
Manage options Manage services Manage vendors Read more about these purposes
View preferences
{title} {title} {title}
Scroll to Top