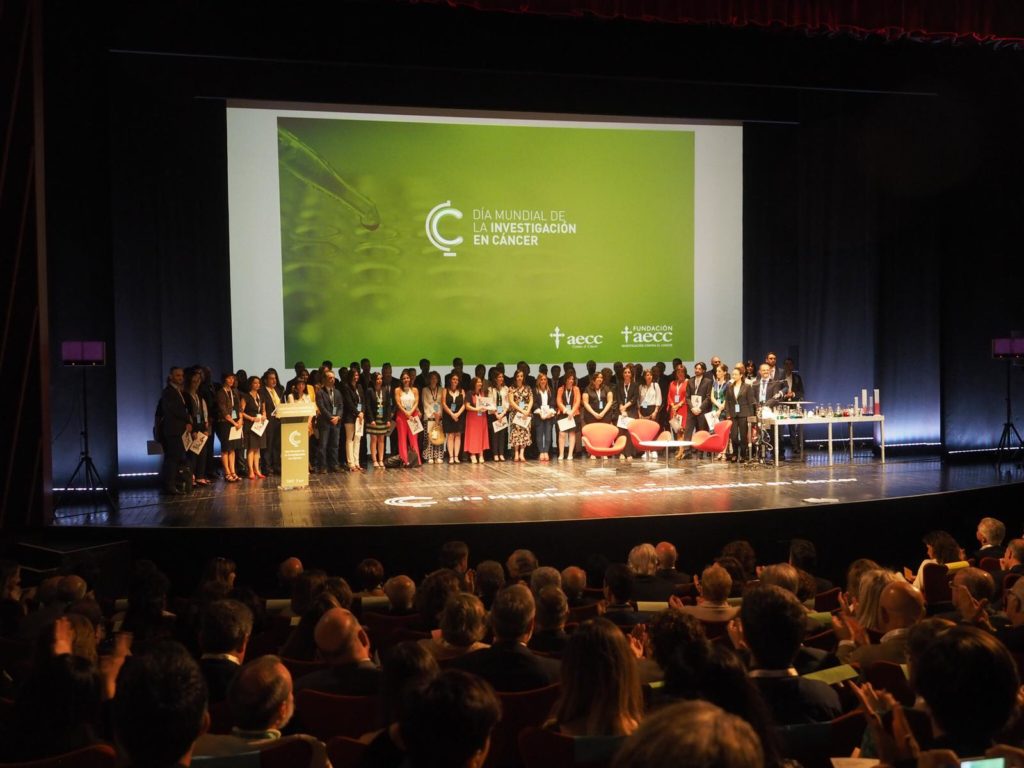 On the occasion of World Cancer Research Day (WCRD), which takes place every year on September 24th, the Spanish Association Against Cancer (AECC) awarded its 2018 AECC Cancer Research grants. The awards ceremony was chaired by Her Majesty the Queen, as Honorary President of the AECC and the AECC Scientific Foundation.

This year, AECC has awarded 160 cancer research grants worth 17.6 million euros. These grants, including five projects with the participation of IDIBELL researchers, fund ideas at the forefront of cancer research in order to obtain relevant results in all phases of the disease, with a clear common objective of increasing total survival, currently at 53%, to 70% by 2030.

“This project is the natural consequence of another one previously funded by the AECC, but with a more relevant and concrete objective: to characterize the most lethal endometrial cancer group, which has a variation in the number of DNA copies (HCNEC)”, explains Dr. Matías-Guiu. The project aims to characterize this tumor subtype using samples of the tumor banks that the five participating groups have been sharing for years. The aim is to improve the techniques for its identification, as well as to identify therapeutic targets and potential new drugs.

Collaborative research from bench to bedside

Among the grants for coordinated translational groups, the project coordinated by Dr. Arkaitz Carracedo (CIC Biogune), has Dr. Mariona Graupera (Oncobell-IDIBELL) as participant, in addition to Dr. Roger Gomis (IRB), Miguel Unda (HUB) and Enrique González (HUM). In this project, they propose a multidisciplinary, transversal and translational approach to prostate cancer to deepen into the molecular mechanisms involved in the development of metastases that appear before having received any treatment. In accordance with the type of aid, the final objective is to promote the transfer of translational research to the clinical practice.

On the other hand, the coordinated translational group of a consortium led by Dr. Victor Moreno (IDIBELL-ICO-UB) aims to evaluate the association of a large number of known and unknown factors with cancer and, more importantly, use them in synergy to estimate and quantify the risk of people developing cancer.
“We are a consolidated consortium of research institutes in 12 Spanish provinces that manages biological samples, epidemiological and diet data of 6008 individuals with common cancers (colorectal, breast, stomach, prostate and chronic lymphocytic leukemia) and 4098 population controls. Our final objective is to identify key biomarkers that could be used in population screening to help identify the people with the highest risk of developing one of the five addressed cancers, to not only reduce morbidity and social impact, but also health care costs”, says Dr. Moreno.

New therapeutic approaches in the fight against sarcoma

Dr. Óscar Martínez-Tirado, leader of the Oncobell group (IDIBELL) of research in sarcomas, has been awarded an “AECC Idea Semilla” grant. The purpose of these grants is to fund ideas that encourage the generation of new research opportunities, which, if successful, can be translated into solid research projects.

“One third of sarcomas is characterized by recurrent genetic modifications; in our project, we aim to develop an innovative – and unique – therapy for this type of sarcomas based on the use of nanotechnology. The objective is to create a product close to personalized medicine, since it could target a specific mutation of each tumor. In addition to treating patients more efficiently, the therapy would reduce the side effects inherent to standard chemotherapy, so the benefit would be double”, explains Dr. Martínez-Tirado.

A postdoctoral grant for bladder cancer

The AECC Foundation has also awarded researcher Samuel Gonçalves, from the Oncobell research group (IDIBELL-ICO) led by Dr. Alberto Villanueva, a postdoctoral grant to carry out a research project on bladder cancer.

The project by Dr. Gonçalves, who has the collaboration of Dr. Javier García del Muro as a clinical manager, focuses on the generation of advanced models (orthotopic xenographs) of bladder cancer resistant to therapy with cisplatin and immunotherapy. “This is a high-impact project in oncology, since having models that mime bladder cancer is essential for the development of treatments in the future”, says the researcher.

Share on Facebook
Share on Twitter
Share on Linkedin
Share on Email
Tweets by @idibell_cat
Tags: Cancer, Colorectal Cancer, Gynaecological Cancer , Sarcoma, Tumor and stromal chemoresistance , Tumour Angiogenesis, Vascular biology and signalling ,
Manage Cookie Consent
To provide the best experiences, we use technologies like cookies to store and/or access device information. Consenting to these technologies will allow us to process data such as browsing behavior or unique IDs on this site. Not consenting or withdrawing consent, may adversely affect certain features and functions.
Manage options Manage services Manage vendors Read more about these purposes
View preferences
{title} {title} {title}
Scroll to Top