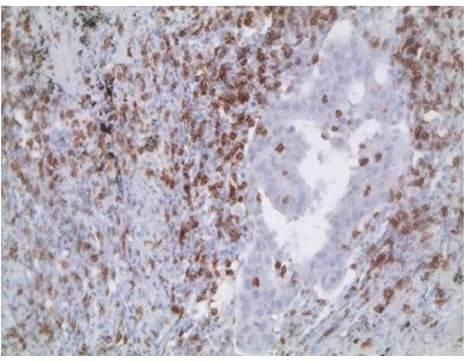 An article published in The Lancet Respiratory Medicine by Dr. Manel Esteller, Director of the Epigenetics and Cancer Biology Program (PEBC) of the Bellvitge Biomedical Research Institute (IDIBELL), ICREA Researcher and Professor of Genetics at the University of Barcelona, proves that a specific pattern of epigenetic alterations in lung cancer predictss whether the tumor will respond to therapy with anti-PD-1 antibodies, the most frequently used immunotherapy in oncology.

“Sometimes, tumor cells manage to hide so that our immune system, usually very effective, does not recognize them, and therefore does not destroy them. Current immunotherapy strategies manage to remove the cancer cell “disguise” so that our immune cells, such as T and B lymphocytes, can act against it”, explains Dr. Manel Esteller. However, there are several types of tumors against which immunotherapy is ineffective. Even within the immunosensitive ones, such as lung and kidney cancer, or melanoma, only about 30-40% respond effectively in the long term. “Therefore, it is important to know beforehand whether a tumor will be sensitive to immunotherapy or not, considering that these are expensive drugs and not without side effects”, the researcher adds.

“Epigenetic signals, such as DNA methylation, could be seen as switches capable of turning our genes on or off, so we thought that they should also be part of the system used by the tumor cell to escape from immune system control”, says Dr. Esteller: after analysing hundreds of lung tumors, IDIBELL researchers realized that those who presented a specific epigenetic fingerprint, which they called EPIMMUNE, responded very well to immunotherapy compared to those who did not have it. The EPIMMUNE signature is found in one third of lung cancers and is associated with an increaset in T and B lymphocytes.

Given these results, the team aims to keep exploring this research line. “Now we want to broaden this type of studiy to other tumor types and other immunotherapies, for example using anti-PD-L1 or anti-CTCLA4 antibodies. In addition, this work is the result of the combined efforts of basic, applied and clinical researchers, as well as the combination of public funding and financial support from “La Caixa” foundation, without which this research would not have been possible”  Dr. Esteller highlights.