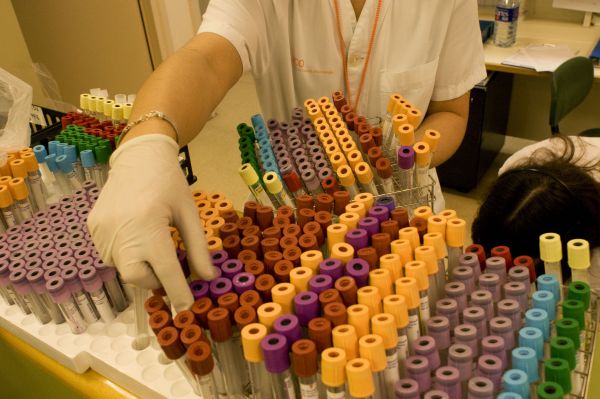 Researchers at the Hospital del Mar Institute of Medical Research (IMIM) in collaboration with researchers from IDIBELL and the Catalan Institute of Oncology have identified a new way of treating colorectal cancer. In the study published in the journal Science Signaling, the team led by Luis Espinosa, investigator research group at IMIM stem cells and cancer, have shown that inhibition of endosomal activity is a potential therapeutic strategy for the treatment of cancers with mutated BRAF gene. This discovery is an important step in customizing the treatment of colorectal cancer, since the presence of this mutation is associated with increased resistance to standard therapy.

Colorectal cancer (CRC) is the second leading cause of cancer death in Western populations. Tumors carry mutations in KRAS (40% of CCR) or BRAF genes (between 5 and 15% of these cancers) are ineffective treatments and related to poor prognosis. “Inhibitor drugs KRAS are extremely toxic and in the case of BRAF inhibitors, their use is limited due to the acquisition of drug resistance. In this context, it is vital to identify new therapeutic targets to improve treatment” Espinosa said.

In this work, researchers have studied samples from 98 colorectal cancer patients with different mutations in KRAS and BRAF genes. The results show that mutant KRAS and BRAF proteins, although activate similar pathways act differently on elements of the NF-kB pathway (KRAS activates NF-kB only), one of the most important pathways in the regulation of innate immunity and acquired. Partly related to its function as a regulator of the immune response via NF-kB is also a key regulator of cancer progression. Therefore, blocking this pathway is one of the most commonly suggested strategies for treating the disease. In this context, “Identify differences in the behavior of KRAS and BRAF on elements of NF-kB is very important to customize treatment based on their inhibition and design specific for each type of cancer strategies. Our results indicate that NF-kB inhibitors have no effect on tumors with BRAF mutated, unlike with mutated KRAS tumors, “explains Luis Espinosa

Furthermore, study results open a new therapeutic strategy based on the inhibition of IKKα P45-enzyme, a protein essential type of tumor progression, in the case of tumors with mutated BRAF. This enzyme (P45-IKKα) is generated in the endosomes, a cellular organelle that transports material just added to the cells and needs of a specific acidic environment for optimal performance. In the experiments have shown that inhibition of endosomal acidification prevents activation of P45-IKKα and specifically inhibits the growth of cancer cells with mutant BRAF, both in vitro and in vivo. “We showed that these endosomal inhibitors, currently used for example in the prevention and treatment of malaria, can be used to prevent metastasis of colorectal cancer without increasing toxicity of standard treatments. In fact, we found in mice that inhibition of acidification of endosomes enhances the effect of conventional chemotherapy, “explains Luis Espinosa

Although these results are an important step forward in understanding the mechanisms of tumor progression, although there will be a lot of research before applying this treatment in clinical practice. The current focus of the research team to identify new inhibitors of endosomal, more efficient and more specifically to the P45-IKKα enzyme function.