Coffee Science with Luis Fuentemilla: ”Forgotten is the limit of our memory” 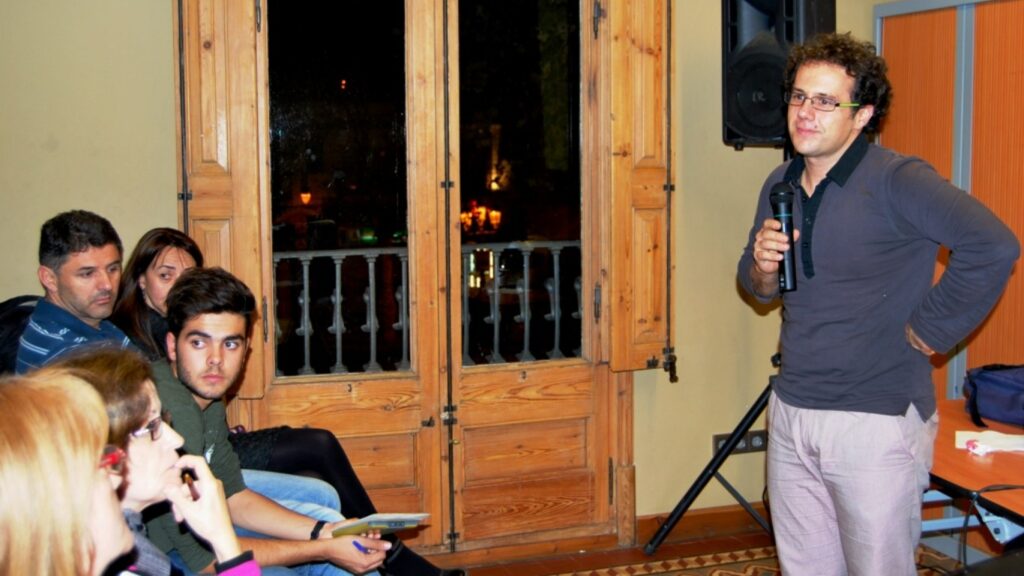 The coffee science “Speaking about memory” with Dr. Luis Fuentemilla, IDIBELL and UB researcher, at the Can Deu Civic Centre at Les Corts last November 22th, takes part of the Science Week. The event, organized by Les Corts District and the Catalan Association of Scientific Communication (ACCC) with the support of IDIBELL, was about memory and the latest advances in neuroscience.

“My area of study is the cognitive neuroscience, which is about predicting the behaviour by studying the previous actions. We want to know how the brain works with various technologies such as neuroimaging”, introduced Luis Fuentemilla. Several scientists work in this research area as biologists, chemistries, mathematics and engineers, among others.

During the talk the speaker proposed an exercise about the memorial ability of the participants who had to recall a list of words. It had been showed that the assistants thought hearing words that they didn’t have heard: that is the false memory.

The researcher described the memory as a system comprising three basic dissociated processes including: coding, i.e. the input information processing in our brain; storage, which involves a permanent record of coded information, and finally, recovery, which implying a return of the stored information in response to specific keys to be used in a process or activity. “It’s very different to store a list that does not make sense that makes it with some words with sense or meaning. Emotion is a directly input factor to the storage of information”, said the IDIBELL-UB researcher.

There are three stages of memory: capacity, durability and function. The capacity refers to the things we can remember. The durability is the length we can remember. And the function is what we do with the information stored. The incoming information is transferred from one stage to another. “The evolution of our cortex has differentiated us from other animals. If you eliminate that part, you would not be able to recall anymore. Memory is present in almost all animal species”, said Fuentemilla.

The memory can be differentiated between declarative, which is divided into episodic memory which refers to things that happen, semantic memory related with things that don’t happen to us, like what is the capital of France, and the work memory that serves us in short term. We also have non-declarative memory, which is based on learning and we used it when we are cycling or driving.

Reconstructing the past, imaging the future

We take decisions with little information. “Our brain gives us the capacity to imagine situations that we have not experienced. We can go forward with short preliminary information”, said researcher.

Really aware of what we remember?

“We are not aware of what we remember. There is few information about memory, but it has no limits”, said Fuentemilla.

During the speech, the participants spoke about genes and epigenetic, also about evolution and how it has affected our memory. “What is the limit of our memory? The limit is forgotten, declared the researcher.

In some experiments to analyse how work the memory, people who think they can’t remember some information, they can do it intuitively: their eyes directed went towards the place where the required information was. The researcher reflected the results of recent studies concluding the speech talking about neuronal regeneration by saying that “the key is not whether neural processes have more or less neurons, but how they are connected and organized.”

Share on Facebook
Share on Twitter
Share on Linkedin
Share on Email
Tweets by @idibell_cat
Tags: Cognition and Brain Plasticity, Neuroscience Area, Neuroscience Program, Outreach and education,
Manage Cookie Consent
To provide the best experiences, we use technologies like cookies to store and/or access device information. Consenting to these technologies will allow us to process data such as browsing behavior or unique IDs on this site. Not consenting or withdrawing consent, may adversely affect certain features and functions.
Manage options Manage services Manage vendors Read more about these purposes
View preferences
{title} {title} {title}
Scroll to Top