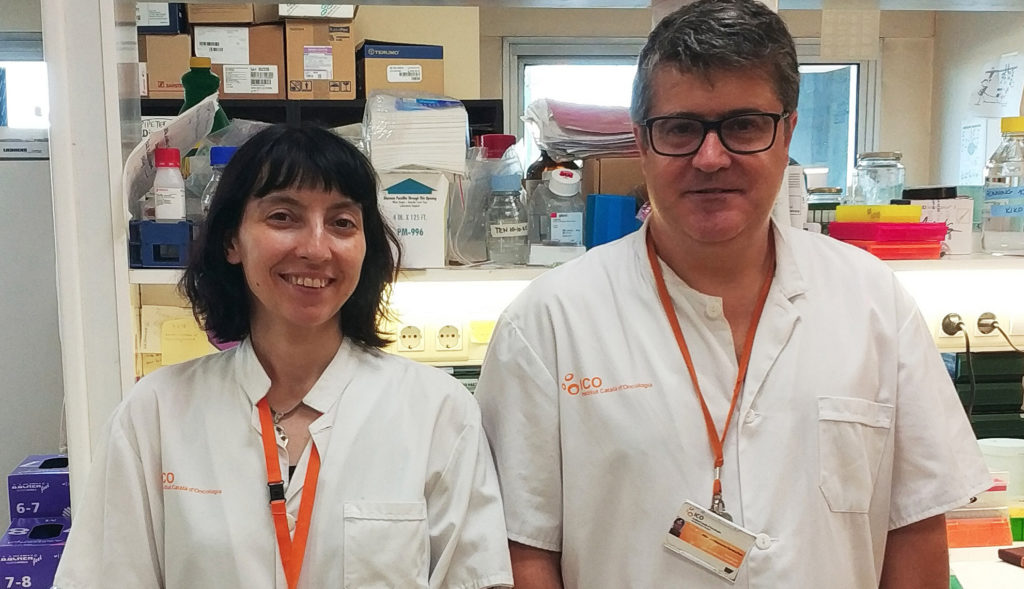 •    The use of this combination of drugs in human patients will now be studied. The study is published in the journal Molecular Cell

A study led by researchers from the Hospital del Mar Institute of Medical Research (IMIM) with the participation of researchers IDIBELL-ICO, has determined, for the first time, the importance of a cellular mechanism that may be key to the treatment of metastatic tumors. The work has demonstrated the role of a protein, the kinase IKKα, in the repair capacity of tumor cells. It is a key factor for resistance to the treatment and spread of the tumor. It is published in the journal Molecular Cell.

Researchers have analyzed the role of this protein, activated by the mutations of the BRAF and KRAS oncogenes, present in the majority of the most aggressive tumors. The function of this protein is to facilitate the repair of DNA damage of tumor cells that has caused the chemotherapy treatment, which makes them more resistant to the action of these drugs. This is a key function for the treatment approach, since the now published study conclusively demonstrates that combining the action of an inhibitor of the BRAF oncogene with chemotherapy deactivates it and ends with the tumor.

“These same oncogenes, in addition to turning normal cells into tumor cells, allow them to repair the damage caused by chemotherapeutic agents or radiation, and make them more resistant. That is, they play a double role, facilitating tumor transformation and protecting the tumor from the damage that chemotherapy and radiation impose”, explains one of the main authors of the study, Dr. Lluís Espinosa, director of the Research Group of Molecular Mechanisms of cancer and the stem cells of the IMIM and member of CIBERONC. “The presence of these mutations makes treatment very difficult,” he explains, “but it is also an advantage because if, thanks to these mutations, the tumor cell is more resistant to damage, the elimination of its activity with drugs that are currently in the clinical practice, make it especially sensitive to treatments. And this is what we have demonstrated”.

The study included researchers from the Stem Cell and Cancer Group of the IMIM, as well as doctors from the Medical Oncology and Pathological Anatomy services of Hospital del Mar, and researchers Alberto Villanueva and Maria Martínez-Iniesta from the Catalan Institute of Oncology (ICO) – Bellvitge Biomedical Research Institute (IDIBELL). Members of the Proteomics Unit of the Center for Genomic Regulation of Barcelona (CRG) and The Francis Crick Institute of London have also participated.

Analysis with tumors of human patients

The researchers verified the role of the IKKα protein and its importance as a therapeutic target, implanting in mice colon tumors from human patients who had developed metastasis and resistance to treatment. The results of the study showed that animals that did not receive treatment or were only treated with BRAF inhibitors or chemotherapy died. But those who received a treatment that combined these inhibitors with chemotherapy survived. Moreover, it was found that the tumor cells had died. These data have also been confirmed with in vitro samples.

The promoters of the study now want to start a clinical trial in cancer patients, taking advantage of the fact that the drugs used in the study already exist and are used in clinical practice. Firstly, its possibilities in the treatment of colon and rectal cancer will be analyzed, but they do not discard that it is also useful in any kind of tumor with the presence of the BRAF and KRAS oncogenes, as would be the case of pancreatic cancer or melanoma. Some expectations summarized by Dr. Clara Montagut, head of the Department of Digestive Oncology of the Medical Oncology Service of the Hospital del Mar and IMIM researcher, point out that “the results of the study are new and promising and open new ways of cancer treatment. But before reaching the patients, there will first be a clinical trial to confirm the efficacy results and characterize the side effects in humans”.