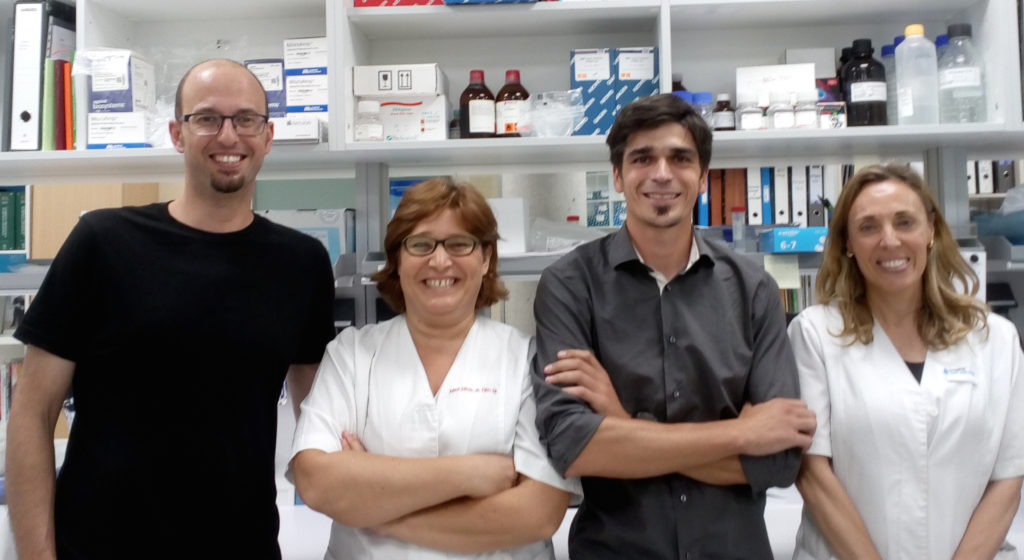 Patients with atypical Rett syndrome show altered neuronal, motor, cognitive and social development. The patient who has been the object of this study presents a mutation in the GRIN2B gene, which codes for a subunit of NMDA glutamate receptors of the NMDA type called GluN2B. “Our research group specializes in the study of these receptors, which in physiological conditions are associated with learning processes, memory, neurodevelopment and neuronal plasticity, and which are the main actors in excitatory transmission and neuronal function”, explains Dr Altafaj.

The HSJD medical team and the research group of Dr Altafaj initiated the study determining the impact of this GRIN2B mutation in the clinical manifestations of the patient. In order to find it out, they surrounded themselves with experts in the field of structural chemistry (Dr Olivella, UVic) and biophysics (Dr Soto, UB). The multidisciplinary study determined that the simple change of a single amino acid (deriving from the GRIN2B mutation) caused a drastic reduction in the functionality of NMDA receptors. With these results, Dr Altafaj’s team began a second phase of cellular, physiological and biochemical studies with the participation of Dr Carles Sindreu (UB), which allowed them to identify a set of neuronal alterations derived from the hypofunctionality of the mutated receptors.

“In light of these experimental evidence, we proposed a very simple line of reasoning, which has become successful”, Dr Altafaj explains. “Since the mutation of the receptors leads to less activity, it is necessary to recruit them in a more sustained way. If we imagine a glutamate receptor like a door that opens to allow calcium (a necessary element for neuronal function) in, the GRIN2B mutation causes this door to not open sufficiently. Therefore, if we can increase the frequency with which this door opens, we will, in this way, compensate for the defect. And this is how we evaluated the effect of D-serine (a co-agonist of these receptors, which promotes their opening), which reversed part of the alterations caused by the GRIN2B mutation.”

The administration of D-serine has shown some toxicity in rodents, but its stereoisomer L-serine is a natural amino acid that is found in several foods. Chronic supplementation of L-serine powder in the patient’s diet (which results in an increase in D-serine levels) led to a remarkable improvement in the patient’s motor and communicative abilities. This pilot study was received with enormous interest from families with children who present mutations of the GRIN genes (“GRINpaties”), and the initiative coordinated by Dr Altafaj has recruited10% of patients with GRINpaties worldwide. Combining functional studies and the evaluation of new therapeutic complementary strategies, the Dr Altafaj’s team supports families and the European clinical community, also raising awareness for this rare neuropediatic diseases.

A promising treatment with no side effects

Indeed, the evolution of the patient, who was treated by Dr Àngels Garcia Cazorla and Dr Anna López (HSJD), showed that dietary supplementation with L-serine is associated with significant improvements in the patient’s symptoms, both motor and cognitive. “The patient is able to carry out basic motor tasks that were unthinkable of at the beginning of the treatment, 17 months ago. We could say that the patient is connected to the outside world that surrounds him and that represents a critical and key step towards establishing new neuronal connections”, describes Dr Altafaj describes.

The researchers are cautious but at the same time optimistic: “the results that we observe in the patient after a year and a half are very promising and we hope they will continue improving, but we must also bear in mind that they are the result of a combined effort of several therapeutic interventions carried out by the family and other multidisciplinary teams. However, previous experiences with similar clinical cases had not shown such significant improvements, and in this sense this study makes us be very optimistic and pushes us forward in this direction”. Because of that, a current pilot study has been joined by several European children with GRINpaties linked to the hypofunctionality of the NMDA receptors, and a multicentre clinical trial is being organized at European level.

Even though it has been led by IDIBELL, the study has been extremely collaborative and multicentric, including doctors and researchers from the HSJD, researchers from the UB, UVic, the IIB Sant Pau, the IDIBAPS, and the CIBERER: all in all, it shows “a great understanding between Catalan biomedical institutions, and above all, a strong commitment of all participants, who joined in order to improve the quality of life of the patient”, Dr Altafaj says. The results of this project, who was spontaneously initiated without funding, have laid the foundations for a new project funded nationwide, and which is also supported by multiple donations that allow researchers to continue advancing in the study of these mutations and the neurological diseases they cause.