The Third Warehouse of Biological Information: The RNA Code 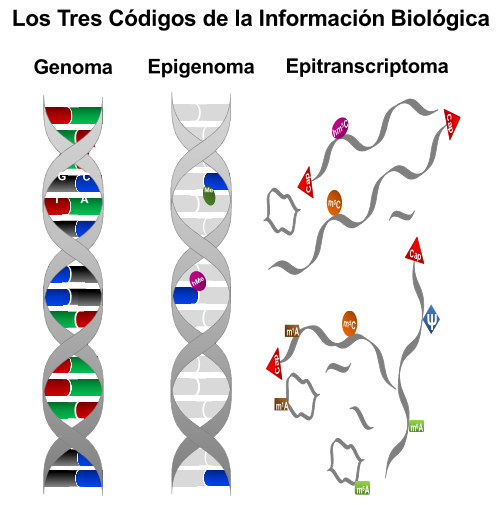 The best-known way our cells and tissues store biological information is their genetic code, derived from the DNA sequence (Deoxyribonucleic Acid). During the last two decades, the epigenetic code has been identified as capable of controlling our DNA through a series of chemical tags. Today, an article published in Cell by Manel Esteller, coordinator of the Epigenetics and Cancer Biology Program of the Bellvitge Biomedical Research Institute (IDIBELL), ICREA Researcher and Professor of Genetics of the University of Barcelona, unveils the existence of a third way of storing biological information: the epitranscriptome code, or, in other words, the chemical modifications of Ribonucleic Acid (RNA).

“We have known for many years that our DNA “speaks” through the expression of messenger RNA molecules, and this messenger RNA was considered a passive subject of this information transmission process. In our Cell paper we propose that RNA is also capable of storing highly complex biological information, since it has its own code of chemical modifications”, Dr. Manel Esteller explains.

“Messenger RNA is responsible for producing the proteins, the biomolecules that control our body, from contracting muscles to allowing the transformation of light into signals that our brain can translate. Now we know that, like DNA, RNA can be metilated on its “C” and “A” units, for example, that it can modify its “U” component or lengthen and extend its ends with new pieces that are not present in the genome”, adds the IDIBELL researcher.

DNA consists of four pieces: A, C, G and T (Adenine, Cytosine, Guanine and Thymine). These four “bricks” are the so-called DNA bases; when the 6,000 million pieces in our genome are combined, they generate to the genetic variability that leads to a wide range of characteristics and functions of living beings.

At the same time, there is the so-called epigenetic code, which would resemble a spelling and grammar book of our genome, since it is able to control it by chemically modifying our DNA and the proteins that regulate it. Among the most important epigenetic marks, there are DNA methylation and histone modifications. At the beginning of this 21st century, the study of the epigenetic code experienced a spectacular “boom”, since it was proven that alterations at methyl cytosine level contribute to the development of many human diseases, including cancer.

With the identification of the epitranscriptome new research questions arise. “Now we begin to know how this third code is controlled in healthy cells, but we do not know much about how it is altered in human disease. It will be a challenge to tackle within it in the next decade”, Esteller says.