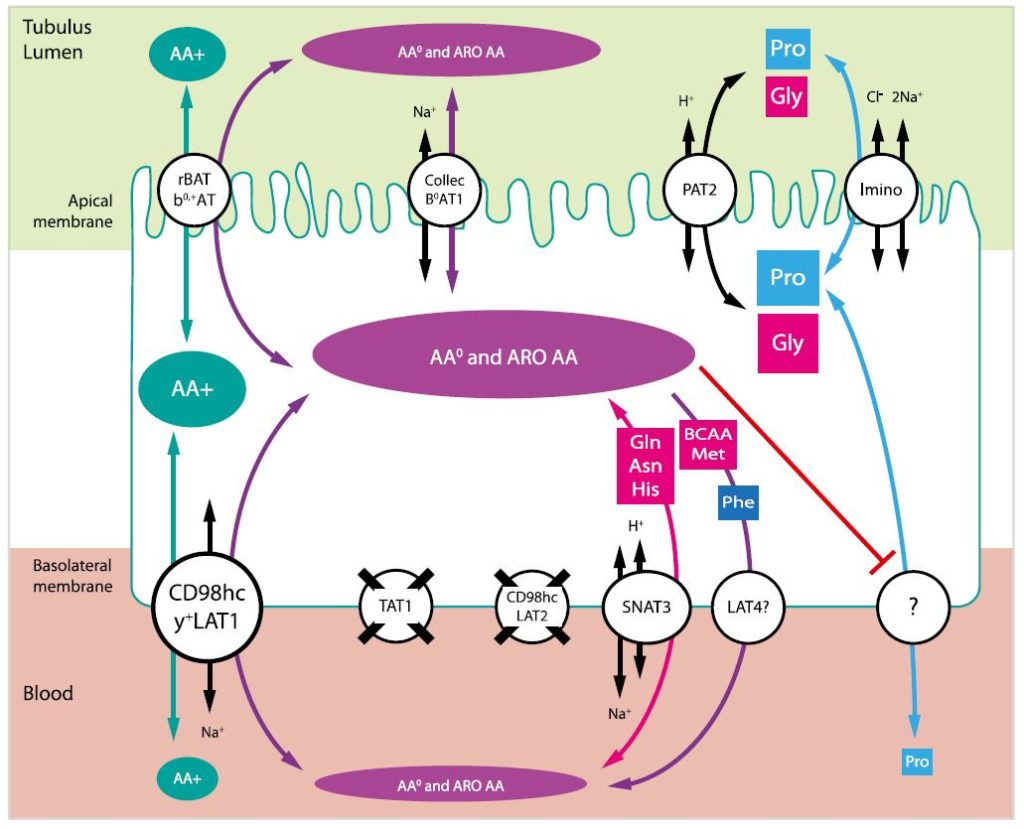 Researchers led by Dr. Virginia Nunes (IDIBELL, UB, CiBERER U730) and Dr. Manuel Palacín (IRBB, UB, CIBERER U731) have demonstrated, for the first time, in vivocooperation of two basolateral transporters of neutral amino acids and their involvement in the renal reabsorption of these amino acids. The work, published in the Journal of the American Society of Nephrology (JASN), has counted on the participation of CIBERER U703, led by Rafael Artuch, and of CIBERDEM CB/08/0017, led by Dr Antonio Zorzano, as well as the collaboration of the group of Dr François Verrey at the University of Zurich.

The renal reabsorption of amino acids is essential for the maintenance of the homeostasis of the whole organism; dysfunctions of this process lead to diseases such as cystinuria or Hartnup’s disorder. Although these and other known aminoacidurias are caused by defects in the proteins located in the apical membrane, in humans only one aminoaciduria, specifically of cationic amino acids, is associated with the dysfunction of a basolateral transporter. In order to better understand the basolateral mechanisms of this process, the groups of Drs. Nunes, Palacín and Verrey generated a double knockout mouse model for the genes Slc7a8 and Slc16a10, which code for the catalytic unit of the neutral amino acid exchanger LAT2/CD98hc and the aromatic amino acid uniporter TAT1, respectively.

The analysis of renal function in the mouse model showed that the ablation of both transporters resulted in a defect of tubular reabsorption, leading to loss in urine not only of aromatic amino acids and other neutral substrates specific to both transporters, but also of basic amino acids and proline. Additionally, through an exhaustive analysis of the gene expression of more than 15 transporters and their possible variants, the basolateral transporter and +LAT1/CD98hc were identified as possible compensators for the lack of LAT2 and TAT1.

The results obtained in the characterization of this double knockout model for LAT2 and TAT1 suppose a clear demonstration of the functional synergy of both transporters in vivo, where the basolateral flow of the LAT2 substrates depends on the recycling of aromatic amino acids through TAT1. It is also the first time that the participation of LAT2 in the process of renal reabsorption of amino acids is demonstrated. Together with the evidence of the existence of compensatory mechanisms by other transporter (s), these findings would explain why neutral aminoacidurias due to the defect of basolateral transporters have not been identified in humans.

Share on Facebook
Share on Twitter
Share on Linkedin
Share on Email
Tweets by @idibell_cat
Tags: Genes, Disease and Therapy Program, Human Molecular Genetics, Traslacional Medicine,
Manage Cookie Consent
To provide the best experiences, we use technologies like cookies to store and/or access device information. Consenting to these technologies will allow us to process data such as browsing behavior or unique IDs on this site. Not consenting or withdrawing consent, may adversely affect certain features and functions.
Manage options Manage services Manage vendors Read more about these purposes
View preferences
{title} {title} {title}
Scroll to Top