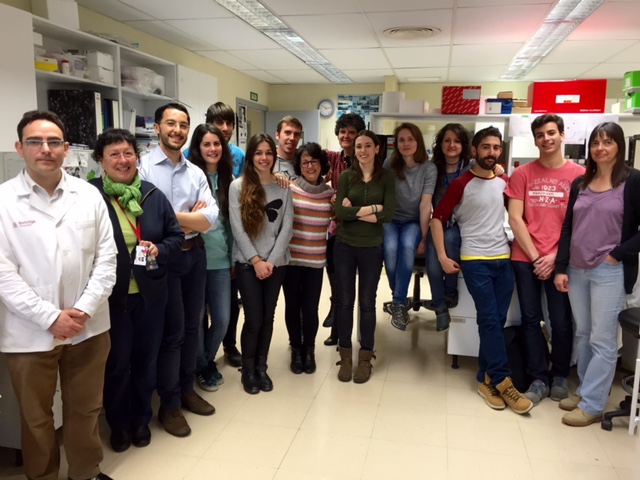 The research of the TGF-beta and cancer group of the Bellvitge Biomedical Research Institute (IDIBELL) within the IT-LIVER (Inhibiting TGF-beta in liver diseases) consortium, a collaborative European action coordinated by Dr. Isabel Fabregat, has led to three new impact publications that offer new insights into the molecular mechanisms associated with the cytokine TGF-beta in liver cancer.

The IT-LIVER consortium has provided a multidisciplinary and intersectorial research training programme for young researchers, so as to prepare them for leading roles in chronic liver disease research and drug discovery in Europe. A good example of that is IDIBELL’s researcher Jitka Soukupova, funded by this project, who leads two of the three articles published by the group in recent months.

The first of the articles led by Dr. Soukupova, published in Scientific Reports, analyzes the metabolic profile of hepatocellular carcinoma cells (HCC) that show differential expression levels of the TGF-beta cytokine; the research proposes a new protumorigenic role of this cytokine in connection with its ability to regulate the metabolism of tumor cells and generate a more invasive phenotype. The research has been carried out in collaboration with groups led by Gianluigi Giannelli (IRCCS S. De Bellis, Bari, Italy), a consortium member, Antonio Zorzano (IRB-UB, CIBERDEM) and José Carlos Perales (IDIBELL-UB).

The other article, published by Oncotarget, explores the molecular mechanisms behind the combined action of the drugs sorafenib and reminostat in HCC treatment, demonstrating how reminostat contributes to sensitize tumor cells to the action of sorafenib, since it counteracts the mesenchymal phenotype induced by the production of TGF-beta in these cells. In this case, the research was made possible thanks to a collaboration with the company 4SC AC (Munich, Germany), in parallel with the IT-LIVER consortium.

On the other hand, collaboration with research groups led by Steven Dooley (University of Heidelberg), and Teresa Serrano and Emilio Ramos (IDIBELL-HUB), also members of the consortium, has led to the third study, first-authored by Joaquín Moreno-Cáceres and Daniel Caballero-Díaz and published in Cell Death and Disease. In this article, the relationship between the levels of caveolin-1 (CAV1, a membrane protein) and the response of TGF-beta, which plays a dual role in cancer, was assessed. It is known at disease onset TFG-beta acts as a tumor suppressor, but in advanced stages it can promote tumor progression; therefore, the article proposes CAV1 as a potential biomarker in order to stratify HCC patients, since CAV1 expression would be related to the protumorigenic action of TGF-beta and the adequacy of using inhibitors of this pathway as therapy.

The IT-LIVER consortium, which made the research possible, is a Marie Curie European initial training network (ITN) led by IDIBELL. The leader of the research group in TGF-beta and Cancer of IDIBELL (Oncobell programme), Isabel Fabregat, is the coordinator of this project, which is participated by eight academic research institutions and four industrial partners from six European countries.

More information about IT-LIVER can be found on its website (http://www.it-liver.eu/) and video.

Share on Facebook
Share on Twitter
Share on Linkedin
Share on Email
Tweets by @idibell_cat
Tags: Cancer, Nutrition, metabolism and Gene Therapy , TGF-beta and cancer,
Manage Cookie Consent
To provide the best experiences, we use technologies like cookies to store and/or access device information. Consenting to these technologies will allow us to process data such as browsing behavior or unique IDs on this site. Not consenting or withdrawing consent, may adversely affect certain features and functions.
Manage options Manage services Manage vendors Read more about these purposes
View preferences
{title} {title} {title}
Scroll to Top