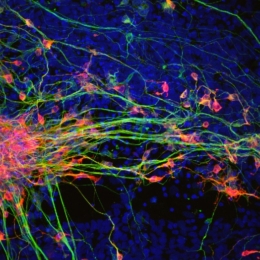 A new research study reveals RAC1 protein could be a new therapeutic target to study the molecular mechanisms related to the neurodegenerative processes in Parkinson’s disease. The study, published in the online edition of the journal Molecular Neurobiology, is led by Antonella Consiglio, researcher at the Faculty of Medicine and Health Sciences of the University of Barcelona, the Institute of Biomedicine of the UB (IBUB) and the Bellvitge Biomedical Research Institute (IDIBELL), and Esther Dalfo, from the Univesitat Autònoma de Barcelona and Universitat de Vic – Universitat Central de Catalunya.

The study describes new protection mechanisms to fight neurodegeneration which is common in neurodegenerative diseases –such as Parkinson’s and Alzheimer’s-, which usually display a protein accumulation. The study shows that RAC1 protein –which takes part in the assembly of the active protein, one of the elements in the skeletal substance- could be an important regulatory factor in in Parkinson’s disease’s neurodegeneration process.

From Caenorhabditis elegans model to patients suffering from Parkinson

In the first stages of the study, the experts proved there was a decrease in the activity of RAC1 protein in the Caenorhabditis elegans nematode –an animal model in biology and genomics- speeded up dopaminergic neuronal death and degeneration -the first ones affected by Parkinson’s disease. This process caused an accumulation of α-Synuclein, the main protein that piles up in several neurodegenerative diseases (Parkinson’s, Lewy body disease, etc.).

Moreover, the use of transcriptomics techniques –the study of RNA- in cells of patients with Parkinson’s showed that those genes that code proteins of the family of RAC1 were at lower levels compared to cells from those healthy individuals.

With these data, the scientific team studied a population of dopaminergic neurons from patients with Parkinson’s disease, which present a higher accumulation of α-Synuclein, a block in autophagy –the recycling machinery for cell compounds- and neuronal death.

These dopaminergic neurons, obtained from pluripotent cells from patients’ skin, “proved an increase of RAC1’s activity which produces an improvement in the markers of the previously described pathology”, says one of the first authors of the study, researcher Carles Catalayud, member of the IBUB, IDIBELL and the Center of Regenerative Medicine in Barcelona (CMRB). These results point out that boosting the function of RAC1 protein could balance the effects related to Parkinson’s disease, with a benefiting result for those patients.

The study has been funded by the Fondo de Investigación en Salud (Health Research Fund, FIS), the Ministry of Economy, Industry and Competitiveness (MINECO), Generalitat de Catalunya and the European Research Council (ERC).