Women and science: past, present and future 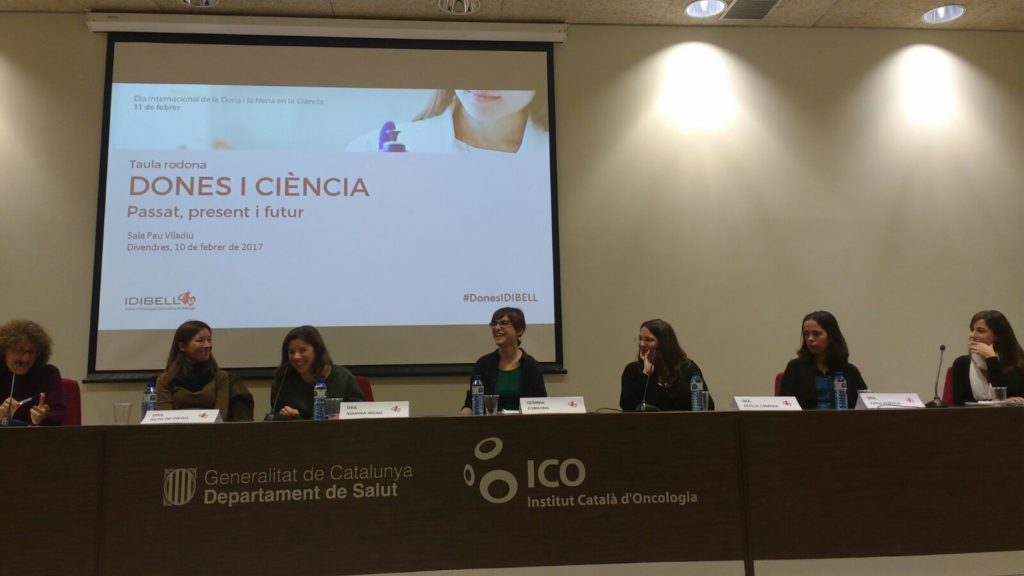 On Friday, February 10th, the Equality Committee of the Bellvitge Biomedical Research Institute of Bellvitge (IDIBELL) organized the round table “Women and Science: present, past and future” to celebrate the International Women Science Day (February 11th). This date is the one chosen by the United Nations to promote the career prospects of women in science and to recognize their achievements in this field.

The roundtable “Women and Science: present, past and future” tried to offer a vision of the current situation of women in the scientific field through two chronological axes: the historical one and the one reated to the different stages in a professional career in science. IN oder to do so, the table invited dr. Virginia Nunes, head of the research program IDIBELL in Genes, Disease and Therapy; dr. Ruth de Diego, ICREA researcher in cognitive neuroscience of Language; dr. Marina Rigau, IDIBELL’s scientific office manager; dr. Estela Cámara, Miguel Servet researcher in cerebral connectivity; dr. Anna Portela, CEO of Xenopat, spin-off IDIBELL dedicated to personalized oncology, and dr. Laura Costas, IDIBELL researcher, epidemiologist and coordinator of the blog “Mejor sin Cancer”.

The roundtable, moderated by Gemma Fornons, began by exploring the differences between men and women in motivating scientific careers in previous educational stages. The need to address the current role of women in science as a global social problem linked to cultural paradigms, the lack of female referents in the media and textbooks and the low self-esteem of girls with regard to science and their leadership skills were some of the topics discussed by participants.

Regarding the influence of gender in relation to the possibilities of stabilization as a researcher or in professional progression, one of the most discussed topics was the suitability of gender quotas in scientific entities or competitive projects: are they the result of an effort to promote equality, or do they stigmatize the woman who represents them? In any case, all participants agreed that we will not be able to talk about equality between men and women at this level as long as it is necessary to establish it through imposed rules, both in academina and industry.

Maternity as a determinant of the so-called “glass ceiling” for women in science was the other great subject discussed not only by the speakers, but by the attending audience, consistint mostly of women. Several interventions showed the difficulty of conciling motherhood with a scientific career developed in a highly competitive environment. Achieving stabilization or a position of responsibility is often seen as somehing implying a sacrifice on a personal level or the need to associate leadership with aggressive attitudes that are perceived differently in men and women.

At the end of the event, several IDIBELL researchers exposed their experiences, difficulties and future perspectives as women in the scientific field. The need to implement better family conciliation policies involving both father and mother, the possibility of creating or consolidating women’s lobbies in science or fighting to eliminate those formed exclusively by men, and some measures and ideas to address discrimination were some of the topics treated and spread through Twitter with the hashtag #donesIDIBELL. You can also find some links of interest discussed throughout the round table down below.