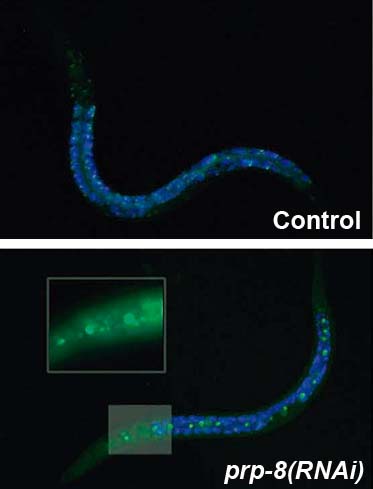 Retinitis pigmentosa is a progressive blindness that affects more than one million people worldwide. A subtype of said disease is caused by mutations in genes that produce proteins responsible for maturation of RNA known as “splicing”.

Researchers of the group of human molecular genetics at the Bellvitge Biomedical Research Institute (IDIBELL), led by Julian Ceron, have created a model of C. elegans worm with homologous gene alterations to human disease. Thus, this model opens up a promising avenue to understand the pathology and investigating new efficient therapies.

The study, funded by the La Marató de TV3 Foundation, has been published in the journal RNA.

Genes that produce “splicing” proteins are expressed in all body cells. However, mutations in these genes affect the retina where they produce cell death, but not in other tissues. It is a mystery that has not yet been resolved.

The study, conducted mainly by the Phd student Karinna Rubio and the researchers Laura Fontrodona and David Aristizabal, combines transcriptomics, genetics and cell biology to create a unique model in which to study Retinitis pigmentosa.

Researchers have found that inactivating the homologous genes that cause the disease in the worm C. elegans, the animal also has a cell death specifically in one cell type.

Furthermore, this study proposes a new hypothesis, based on genomic instability of the affected cells to explain the specificity of the disease in the retina.

The investigator Julián Cerón explained that “the group is currently working on playing in C. elegans of mutations that exist in patients. The great similarity presented by these genes between humans and worms allow using the technique of CRISPR, to create an animal “avatar” with the same mutation in the patient. This is promising because C. elegans could become a platform on which to test drugs in a personalized way”, Modeling of autosomal-dominant retinitis pigmentosa in Caenorhabditis elegans uncovers a nexus between global impaired functioning of certain splicing factors and cell type-specific apoptosis.

Share on Facebook
Share on Twitter
Share on Linkedin
Share on Email
Tweets by @idibell_cat
Tags: Modeling human diseases in C. elegans ,
Manage Cookie Consent
To provide the best experiences, we use technologies like cookies to store and/or access device information. Consenting to these technologies will allow us to process data such as browsing behavior or unique IDs on this site. Not consenting or withdrawing consent, may adversely affect certain features and functions.
Manage options Manage services Manage vendors Read more about these purposes
View preferences
{title} {title} {title}
Scroll to Top