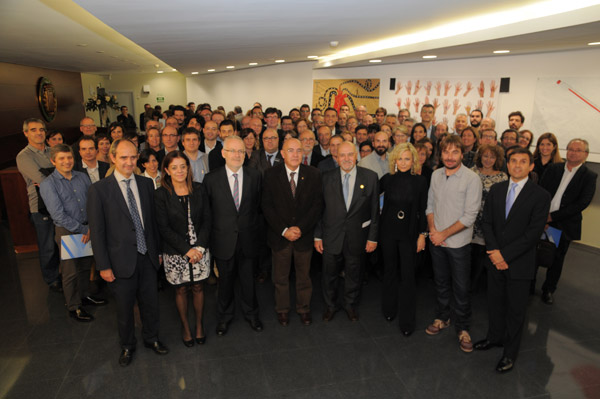 La Marató de TV3 Foundation, which just a year ago was dedicated to raise funds for research into heart disease, will finance three research projects of the Bellvitge Biomedical Research Institute (IDIBELL), and two of the Center for Regenerative Medicine of Catalonia (CMRB).

The ceremony took place on November 5, at the Academy of Medical Sciences and Health of Catalonia and Balearic Islands and presented by Monica Terribas and Quim Masferrer.

The event was attended by the Minister of Health, Boi Ruiz, President of the Academy of Medical Sciences and Health of Catalonia and the Balearic Islands, Àlvar Net and President of the Catalan Broadcasting Corporation and La Marató de TVs foundation, Brauli Duart. Jaume Reventós, director of IDIBELL has also attended, accompanying the scientists of the Institute and the CMRB awarded with the research grants.

The scientists projects funded by La Marató 2014 are those that have been rated best among a total of 121 submitted to the call. Candidates were evaluated by 59 experts in heart disease internationally, following a coordinated system for review by the Agency for Health Quality and Evaluation of Catalonia (AQUA). Quality, methodology, scientific, health and social relevance, innovative value and ultimately the viability of each project have been the factors that have determined the distribution of the funds raised in the last edition of the TV3 Marathon

According to the proposal of the Scientific Advisory Committee of the TV3 Marathon Foundation, the Board has decided to distribute € 11,403,593 collected from a total of 43 scientific research projects of excellence.

And among the group of winners, it has placed the following five projects of IDIBELL and CMRB:

And among the group of winners, it has placed the following five projects of IDIBELL and CMRB: