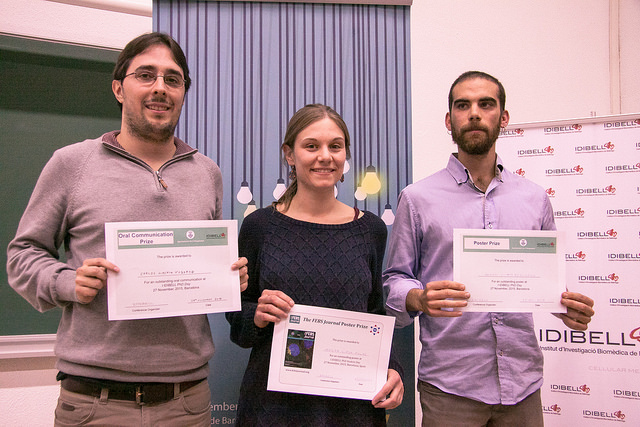 On November 27 the University of Barcelona (Campus Bellvitge) hosted the first edition of IDIBELL PhDday. A scientific conference organized by the predoctoral researchers of the Bellvitge Campus with the aim of raising awareness of the research carried out by doctoral students and promote collaboration between the research groups of the institute.

The Deputy Mayor of coordination and strategic planning of the City of Hospitalet de Llobregat, Francesc Belver and the director of IDIBELL, Jaume Reventós, were responsible for the opening of the day. Throughout the day 24 oral presentations and 54 scientific posters were presented.

Xavier Estivill, researcher at the Centre for Genomic Regulation (CRG) in Barcelona gave the plenary lecture “Genome-centric Dissection of human disease” and a panel discussion about the various career opportunities are also held once finished his doctorate.

At the end of the day took place the ceremony of the first PhDday awards, sponsored by the city of L’Hospitalet and FEBS journal The deputy mayor of Welfare and Social Rights, Cristian Alcazar, presented the award for best oral communication to Carlos Fajardo form the Virotherapy research group; IDIBELL scientific director, Josep Manuel Menchón, gave the award for the best poster to Andrew Guinea from psychiatry and mental health research group; and finally, the representatives of the pre-doctoral researchers presented the award to the second best poster to Helga Simon, from the nutrition, metabolism and gene therapy research group.

The director of IDIBELL, Jaume Reventós, was responsible for closing the event thanking the pre-doctoral researchers their effort to organize this day that he qualified of great success both for participation and for the scientific quality of the papers presented. Reventós called on young people to repeat next year the PhdDay second edition and consolidate the initiative.