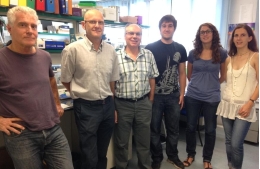 Researchers from the University of Barcelona (UB) have synthetized a compound proved to be a potent inducer of apoptosis in a broad spectrum of tumour cell lines. According to a study recently published in the scientific journal Angewandte Chemical International Edition, the new molecule targets prohibitin, a protein involved in different cell processes and diseases, particularly in tumoral processes. Results represent a promising new therapeutic strategy for cancer treatment and drug discovery.

Several UB research groups centred on different areas collaborated in the study, coordinated by Rodolfo Lavilla, lecturer from the Department of Pharmacology and Therapeutic Chemistry of UB; Joan Gil, professor from the Department of Physiological Sciences II and researcher at the Bellvitge Biomedical Research Institute (IDIBELL), and Fernando Albericio, professor from the Department of Organic Chemistry of UB and researcher at the Institute for Research in Biomedicine (IRB Barcelona). Other research teams have also collaborated in the study, for instance the group led by Isabel Fabregat, lecturer at the Faculty of Medicine of UB and researcher at IDIBELL, and the team headed by Professor Hiroshi Handa, from the Tokyo Institute of Technology (Japan), where one of the first authors of the study, Alba Pérez, made a research stay.

Trifluorinated thiazoline (TFTs) are the new compounds proved to be potent inducers of apoptosis —programmed cell death— in cancer cell lines. In order to study the mechanism that enables these molecules to induce apoptosis, researchers identified the key proteins involved. “Our study shows that the new molecule that was synthetized inhibits the function of prohibitins, a key protein in determining if cells proliferate or they get into a process of programmed cell death”, explains Professor Joan Gil, who also heads the Research Group on Apoptosis and Cancer of the University of Barcelona and IDIBELL and is member of the Thematic Network of Cooperative Cancer Research (RTICC) of the Institute of Health Carlos III. Gil highlights that “it may be the first compound of a family in which there may be other compounds which inhibit better prohibitins”.

There are records of natural products which bind to prohibitins. However, the complexity of such compounds and availability issues compromise their use in biological studies and in therapeutics. “The preparation of TFTs is direct, so they can be readily used in biological and medicinal chemistry programs. They are stable and they feature an innovative scaffold, so they can be considered useful to further study other therapeutic strategies”, explains Rodolfo Lavilla, who also heads the Research Group on Synthesis and Reactivity of Bioactive Heterocycles of the Barcelona Science Park (PCB).

The synthesis of the new molecule was complex due to “the elucidation of its structure, the rationalization of the mechanism and the preparation of these polyfunctional compounds, particularly the molecular probe used to identify the molecular target”, explains Lavilla. The researcher Sara Preciado (UB-PCB) played a key role here as she has developed the main phases of the chemical study within her PhD thesis. According to Lavilla, “the main advantage of this molecule is its synthesis ability because it makes easier to obtain it methodologically and economically”. Moreover —points out Joan Gil—, our data indicate that its action as apoptosis inducer is mediated by prohibitin inhibition and it does not depend on the protein p53 which is mutated or unexpressed in at least 50% of human tumours”. The UB research group has continued researching on this issue together with Professor Thomas Langer, expert on prohibitins from the University of Cologne. “The first results got from this collaborative study prove that the new compound does not induce death on the cells that do not express prohibitin”, concludes Joan Gil.