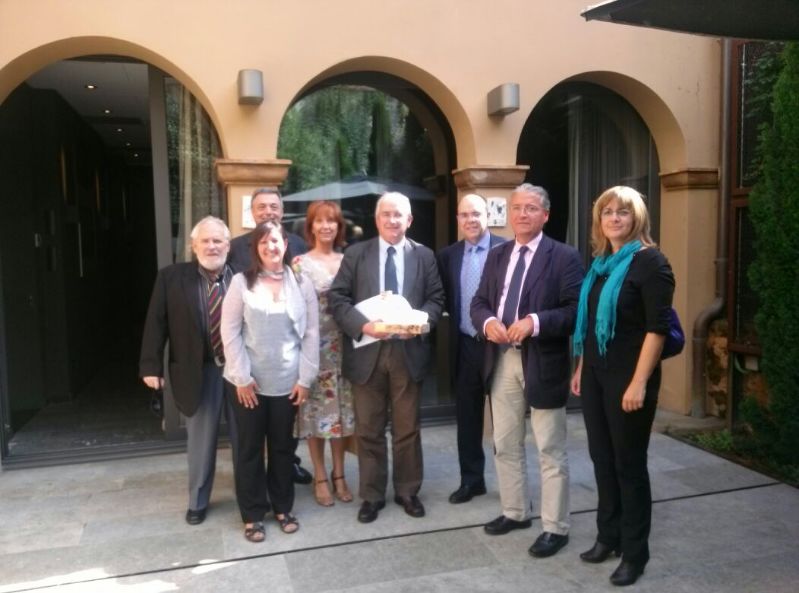 IDIBELL director, Jaume Reventós, has been awarded the Molla d’or Award in recognition of his professional and personal career. The award ceremony was held on October 2ns at the Hotel Nord 1901 Girona.

It is an award given by popular vote through the web www.premimollador.blogspot.com. Candidates are chosen by a jury of people from various professional and interest fields that represent the diversity and plurality of society. Candidates for this second edition of Molla d’Or have been the president of Omnium Cultural, Muriel Casals, the writer Javier Cercas, MEP Maite Sanchez-Schmid, the sportswomen Alex Pannayotou and Nuria Picas and the businesswoman Judith Viader.

Born in Barcelona, ​​Jaume Reventós is Bachelor of Medicine and Surgery, UAB (1977); resident physician and specialist in Clinical Biochemistry (MIR, 1982); and Doctor of Medicine (Cell Biology) at INSERM (1984, Lyon, France). Between 1984 and 88 he was a postdoctoral researcher at The Rockefeller University (NY, USA) where he performed the cloning of genes for transport proteins of steroid hormones. From 88 to 90 was associated professor of

Molecular Biology at Mount Sinai School of Medicine, NY where he also established the first transgenic mouse models overexpressing the genes of these proteins, making evident their physiological roles . In 1990 he returned to Barcelona as Head of Biomedical Research Unit and Translational Oncology (URB) of the Hospital Vall d’Hebron in Barcelona, ​​until June 2014. From March 18, 2014 he is IDIBELL director.

This award comes in 2013 from the idea of ​​two companies Girona: Girona Innovació and Hotel Nord 1901, with the intention of showing that things can be changed from the private sector, and one way to do this is to highlight those values ​​that make our improve society, as opposed to all those examples that have led to a very difficult economic situation like the present. It is also why the winner does not receive any financial compensation; the award is given as a symbol of public recognition and admiration.