New advances in the study of megalencephalic leukoencephalopathy 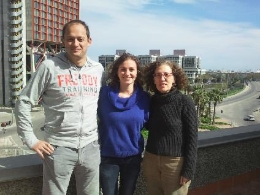 Some types of leukodystrophies, that are neurodegenerative hereditary myelin disorders, are characterized by the presence of vacuoles in which myelin lamellae isolate CNS axons . The megalencephalic leukoencephalopathy (MLC), caused by mutations in the gene MLC1 and GlialCAM is a rare disease with appearance of this type of vacuoles, and currently there is no treatment for those affected.

A new international study published in the journal Nature Communications describes how the dysfunction chloride channel ClC-2 is involved in the appearance of vacuoles in the myelin. The new research is led by researchers Raúl Estévez, Professor at the Department of Physiological Sciences II Health Sciences UB Campus of Bellvitge and member of the Center for Biomedical Network Research on Rare Diseases (CIBERER), Thomas J. Jentsch, Leibniz Institute of Molecular Pharmacology (FMP-MDC, Berlin) and Virginia Nunes, professor of Genetics at the UB, researcher at the Institute of Biomedical Research of Bellvitge (IDIBELL) and also a member of CIBERER.

The new research is based on the development of mouse models that reproduce the disease , which causes macrocephaly, progressive deterioration of motor function and ataxia in humans. The study of these models reveals that the proteins GlialCAM and MCL1 are important for the regulation and localization of the chloride channel ClC-2 in the glia, and finally established the involvement of the channel in the disease.

This relationship between the ion channel CLC-2 and MLC protein was proposed in a previous work, led by the group of Professor Raúl Estévez, in collaboration with scientific teams at CIBERER -MDC and FMP (Neuron, 2012).

The study of these new mouse models has made it possible to advance knowledge of the mechanisms of disease development and represents an opportunity that will, in a not too distant future , implement new therapeutic strategies for patients with this rare disease.

More information on previous studies on the link.