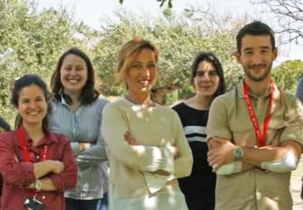 A team of scientists led by Dr. Antonella Consiglio from the IDIBELL and the University of Barcelona (UB), and Dr. Angel Raya from the Center of Regenerative Medicine of Barcelona (CMR[B]/IDIBELL) reveal in Scientific Reports today an efficient and new method for generating fluorescently-labeled dopaminergic neurons (DAn), a specific cell type that die in Parkinson’s diseases (PD), that will facilitate future research on the processes associated with specific DAn biology and disease.

Parkinson’s disease (PD) is an incurable neurodegenerative disorder in the elderly that is characterized by the progressive loss of dopaminergic neurons (DAn) in the substantia nigra of the brain. Its incidence in Western countries is rising due to the progressive aging of the population, imposing a major burden on national healthcare systems. Despite decades of intense research, the pathogenic mechanisms of PD remain unclear.

Dr. Consiglio’s laboratory uses iPSC generated from patients’ skin cells and differentiated into disease-relevant cell types, such as dopaminergic neurons in the case of PD. This offers the unprecedented opportunity to model the events that initiate the pathologic process in PD in vitro, and to assay drug interventions in a high-throughput and systematized manner.

However, drug screening has been limited by the heterogeneity of human PSC-derived ‘dopaminergic’ cultures and our inability to visualise these DA cells live. “To circumvent this technical barrier, we generated a fluorescent TH reporter IPSC line using CRISPR/Cas9 gene editing to knock-in the fluorescent protein in the genomic site of a dopaminergic-specific gene (Tyrosine hydroxylase or TH)”, says Dr. Carles Calatayud, Postdoc in Consiglio Lab.

“This TH reporter iPSCs described in our work, enables to visualize live fluorescent dopaminergic neurons within mixed neural populations and to purify them via FACS. This has been attempted by others prior to this study”, says A. Consiglio “but the expression of the reported gene (TH) is too low for live detection. In our study, we used a brighter fluorescent protein (mOrange), which compensated the low expression of TH”, adds C. Calatayud.

In collaboration with Prof. Jordi Soriano from the Department of Physics at the University of Barcelona (UB), this genetically-engineered line was also employed to reveal unique functional traits of dopaminergic neurons, demonstrating the important potential for this tool for future studies targeted at understanding dopaminergic vulnerability, PD pathogenesis and enable high throughput screening.

Other researchers on the paper were Giulia Carola, Irene Fernandez-Carasa of IDIBELL/UB; Giulia Marco Valtorta, Graziella Cappelletti of the Department of Bioscience, University of Milan in Milan; Senda Jiménez, Mònica Diez of the CMRB/IDIBELL, Barcelona and Javier García-Sancho of the Instituto de Biología y Genética Molecular (IBGM), Universidad de Valladolid, in Valladolid.