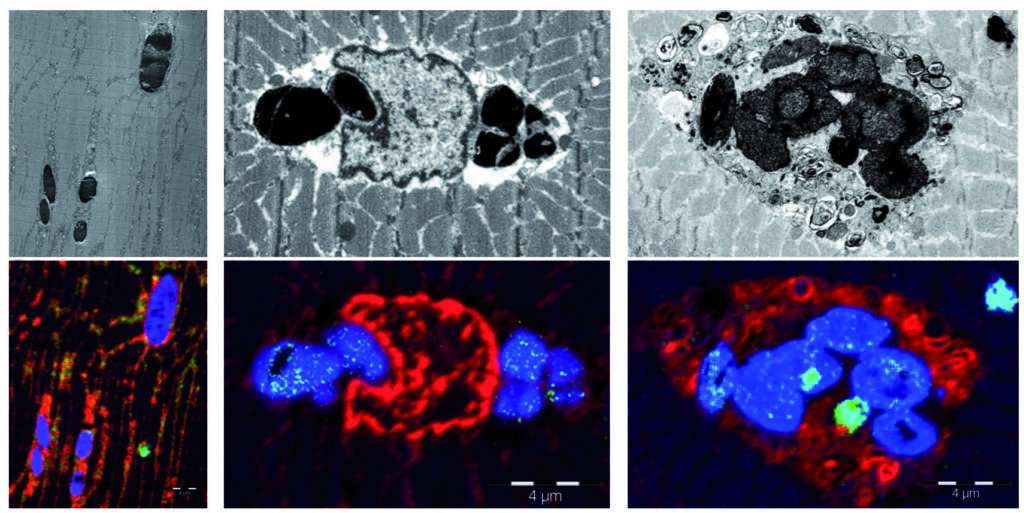 Researchers of the Bellvitge Biomedical Research Institute (IDIBELL) led by Dr. Montse Olivé have described in Nature Communications a new muscular disease caused by a mutation in the myoglobin gene. The study has been possible thanks to a collaboration with a group of geneticists from the University of Western Australia (UWA), led by Prof. Nigel Laing, and researchers from the Karolinska Institute (Stockholm, Sweden).

Myoglobin, the protein that gives muscles their red colour, has as its main function the transportation and intracellular storage of oxygen, acting as an oxygen reservoir when there are low levels (hypoxia) or a total lack thereof (anoxia). It also acts as scavenger of free radicals and other reactive oxygen species, avoiding cell damage due to oxidative stress.

“This is the first time that a disease caused by a mutation in the myoglobin gene has been identified”, says Montse Olivé, doctor at the Bellvitge University Hospital, responsible for the muscular disease area and researcher of the Human Molecular Genetics group at IDIBELL and member of the program Genes, Diseases and Therapy. “We have identified the same mutation in several members of 6 unrelated European families, all of whom had the same symptoms and showed very characteristic lesions – called sarcoplasmic bodies – in muscle biopsies,” adds Dr Olivé.

Myoglobinopathy, the name that has been proposed for the new disease, manifests between the fourth and fifth decade of life. It causes a progressive weakness of the axial and limb muscles, and in more advanced stages affects the respiratory musculature and the heart.

The study has also involved, among others, researchers from the ALBA synchrotron and the Autonomous University of Barcelona (UAB). The infrared microscopy of the MIRAS beamline at the synchrotron, which is able to characterize the chemical composition and structure of proteins, allowed researchers to demonstrate the presence of oxidized lipids in the damaged muscle cells. “We have observed that sarcoplasmic bodies correspond to oxidized lipids and misfolded proteins”, says Nuria Benseny, a postdoctoral researcher at the ALBA synchrotron.

Finally, researchers from the universities of Modena and Vienna have identified an alteration in the biochemical and thermodynamic properties of the mutated myoglobin, including an alteration in the oxygen-binding capacity that contributes to the formation of the lipid and protein aggregates that are found in the muscles of the patients.

This discovery has allowed to establish the diagnosis for some patients after many years and will allow researchers to focus on finding a cure for this disease from now on.

Share on Facebook
Share on Twitter
Share on Linkedin
Share on Email
Tweets by @idibell_cat
Tags: Traslacional Medicine,
Manage Cookie Consent
To provide the best experiences, we use technologies like cookies to store and/or access device information. Consenting to these technologies will allow us to process data such as browsing behavior or unique IDs on this site. Not consenting or withdrawing consent, may adversely affect certain features and functions.
Manage options Manage services Manage vendors Read more about these purposes
View preferences
{title} {title} {title}
Scroll to Top