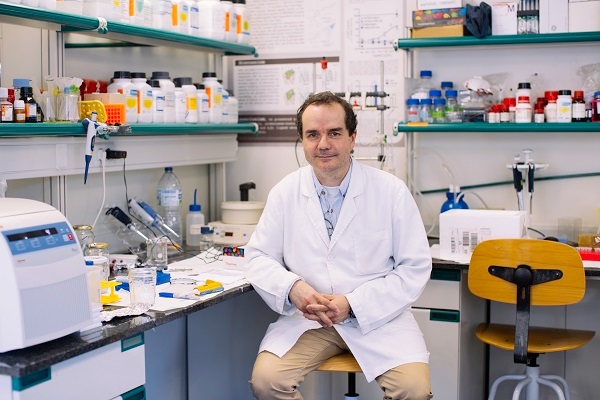 An international team has designed the first potentially therapeutic photoactive drug – MRS7145- to fight Parkinson’s disease, according to the new article in Journal of Controlled Release. This compound, which proved effective in laboratory animals in vivo, has been carried out by a team led by Francisco Ciruela, from the Faculty of Medicine and Health Sciences of the University of Barcelona, the Institute of Neurosciences of the UB (UBNeuro) and the Bellvitge Biomedical Research Institute (IDIBELL), Kenneth A. Jacobson (National Institutes of Health, United States), Ernest G. Nolen (Colgate University, United States) and Jordi Hernando (Universitat Autònoma de Barcelona, UAB).

Optopharmacology: beyond the limits of conventional drugs

Parkinson’s is the second most common neurodegenerative disease after Alzheimer’s and it affects more than 1 % of the population. This disease, which affects the central nervous system, affects more than six million people worldwide, figures that could go higher than twelve million by 2030, according to data from the World Health Organization (WHO). In this disease, the neurotransmitter that controls the motor activity –dopamine- is reduced due the progressive death of dopaminergic neurons.

The action of conventional drugs is sometimes limited due several factors –lack of spatial specificity, slow and inaccurate distribution, etc.- which can reduce its therapeutic efficiency. Also, the efficiency of the traditional treatment on Parkinson’s (levodopa) diminishes over time and it requires to increase the administration of the dose or to change the drug. The adverse effects of new drugs (uncontrolled movements in the body, motor fluctuations, etc.) are another common denominator in most patients.

Optopharmacology is an innovative discipline based on the use of light –with a certain wave length- to control the activity of drugs. Therefore, light-sensitive drugs can act with a higher spatial and time precision and without creating adverse effects in the body.

This photoactive drug is an inactive chemical compound that gets activated with light from a visible spectrum (with a 405 nm wave length) which is not harmful for the body. A series of optical fibers –planted in the striated bodies of laboratory animals- provide the irradiation of this area in the brain, which is responsible for the control of motor activity.

According to the lecturer Francisco Ciruela, “once the striated body is radiated with violet light the active drug is released and blocks the adenosine A2A receptor. The blocking of adenosine receptors has an administrating effect on the activity of dopamine (pro-dopaminergic action)”.

Improving the spatial and temporary precision of the drug and strengthening the commitment of the patient to the therapy are some of the benefits of optopharmacology in Parkinson’s. “A fine time-space precision will enable manipulating the neural circuits in detail and set the functioning of those with therapeutic and neuroprotective purposes”, says Ciruela.

“Nowadays, in addition, there are treatments that are based on the implementation of electrodes in the brain of patients with Parkinson’s to control the electric activity of neurons. In the same lines, optical fibers could make light getting to almost any part of the body (spatial resolution), and these organs would be radiated with light controlled by an electronic device that would regulate the intensity and length of radiation (time resolution).

Maintaining the commitment of patients to the set therapeutic guideline on the long run is a big challenge for chronic diseases. “With a slow release system from the photoactive drug –such as a coupled patch with a radiation system remotely controlled by a phone App- the doctor could control in a precise manner the release of the most efficient dose of the active drug in the place of action (striated body)”, highlights Ciruela.

Although the clinical application of this photoactive drug in patients is still far, this pharmacological innovation could lead the way to a research on new therapeutical solutions for this chronic disease. The new article, published in Journal of Controlled Release, is therefore a step forward in the field of pharmacology to design new therapeutical strategies with photo-sensitive molecules and to set innovative clinical protocols to improve patients’ quality of life.

Share on Facebook
Share on Twitter
Share on Linkedin
Share on Email
Tweets by @idibell_cat
Tags: Neuropharmacology and pain , Neuroscience Program,
Manage Cookie Consent
To provide the best experiences, we use technologies like cookies to store and/or access device information. Consenting to these technologies will allow us to process data such as browsing behavior or unique IDs on this site. Not consenting or withdrawing consent, may adversely affect certain features and functions.
Manage options Manage services Manage vendors Read more about these purposes
View preferences
{title} {title} {title}
Scroll to Top