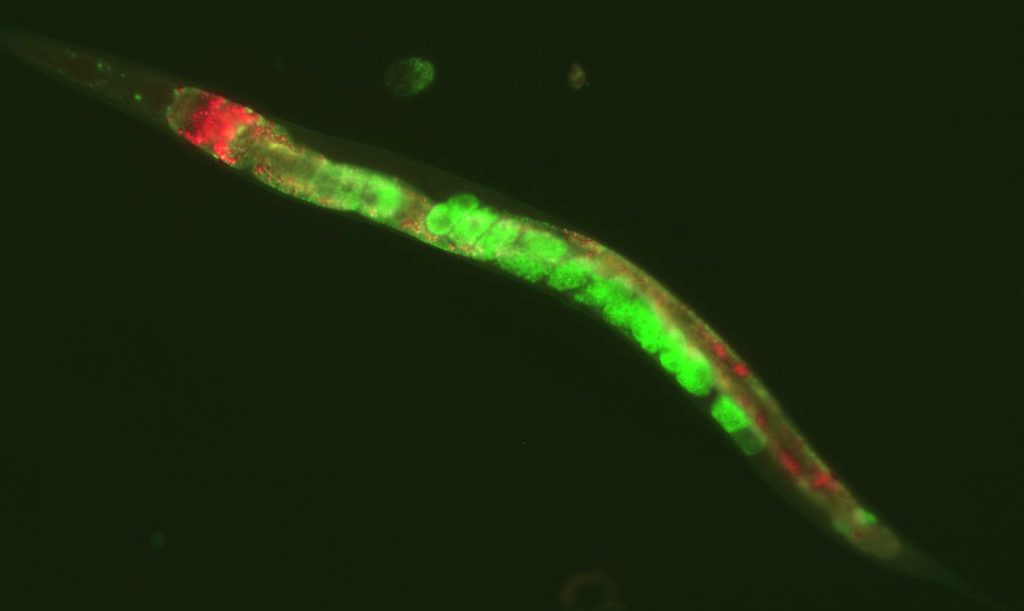 Cisplatin is one of the chemotherapeutic agents more frequently used by oncologists to treat tumors. Cisplatin-based chemotherapy is very efficient but frequently cancer cells adjust its molecular mechanisms to become resistant to cisplatin.

The IDIBELL research group “Modeling Human diseases in C. elegans”, led by Julián Cerón, have been using a microscopic worm to investigate the molecular rearrangements causing the acquisition of resistance to cisplatin. In collaboration with the group of Alberto Villanueva, from the Catalan Institute of Oncology (ICO)-IDIBELL, who is investigating these mechanisms of resistance in human tumors implanted in mice, and thanks to Francisco Javier García Rodríguez’s doctoral thesis, they have established a method to identify genes and molecular pathways that rule the cellular resistance to cisplatin.

The toxic activity of cisplatin is very similar in all animal cells and therefore it is also similar the response of these cells to be protected from cisplatin. The work of García Rodriguez and collaborators open a gate to regulate the cellular response to cisplatin by modifying the activity of metabolic pathways. In other words, set the base to investigate how diet and common drugs can determine the response of patients to cisplatin-based chemotherapy.

One of the most striking results of this study was to determine the strong influence that a single aminoacid has in the animal response to cisplatin. IDIBELL researchers used CRISPR to change the identity of a single nucleotide of the C. elegans genome and as consequence modify the identity of a single aminoacid of the TRXR-1 protein, which is homolog of the human thioredoxin reductase 1 (TRXR1), making the whole animal more resistant to cisplatin. This finding paves the way to the use of C. elegans in the validation of human SNPs (Single-Nucleotide polymorphisms) to evaluate, in a personalized manner, the influence that minimal changes in the genome may have in the patient responses to chemotherapy.

The publication of two articles led by Julián Cerón and Alberto Villanueva this month of June in Disease Models and Mechanisms and Clinical Cancer Research consolidate C. elegans as animal model to study mechanisms of resistance to certain chemotherapeutic agents.

Share on Facebook
Share on Twitter
Share on Linkedin
Share on Email
Tweets by @idibell_cat
Tags: Cancer, Modeling human diseases in C. elegans , Traslacional Medicine, Tumor and stromal chemoresistance ,
Manage Cookie Consent
To provide the best experiences, we use technologies like cookies to store and/or access device information. Consenting to these technologies will allow us to process data such as browsing behavior or unique IDs on this site. Not consenting or withdrawing consent, may adversely affect certain features and functions.
Manage options Manage services Manage vendors Read more about these purposes
View preferences
{title} {title} {title}
Scroll to Top