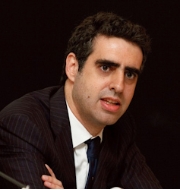 The oncologists Manel Esteller, Joan Massagué and Josep Baselga are the winners of the 28th Catalunya International Prize

“for his revolutionary task, especially on oncology research, with what they significantly contributed to the advances of global medicine”. The awards, recently announced by the President of the Generalitat de Catalunya (Catalan Government), Carles Puigdemont, are given every year to people who contributed with their work to develop cultural, scientific or human values worldwide.

Manel Esteller, who is National Research Award 2015, teaches in the Department of Physiological Sciences of the University of Barcelona. Director of the Cancer Epigenetics and Biology Program of the Bellvitge Institute for Biomedical Research (IDIBELL), he is an international prestigious expert on the study of methylation (biochemical DNA modification) as an altering mechanism of the suppressing genes on human tumors, and focuses his research on studying the epigenetic modifications and development of new epigenetic drugs to treat cancer. Esteller was also honoured with the Rey Jaime I Prize on basic research (2013), XX Severo Ochoa Award for Biomedical Research (2013), the Vanguardia Science Award (2014) or the Medal Josep Trueta to health merit (2015) among other awards.

Doctor Joan Massagué is co-founder of the Biomedical Research Institute (IRB Barcelona), a University of Barcelona participant center, and directs the Cancer Biology and Genetics program at the Memorial Sloan Kettering Cancer Center (MSKCC) in New York. Massagué, National Research Award 2014 in the biology field, graduated in Pharmacy and holds a doctorate in Biochemistry at University of Barcelona. He moved to the United States in 1982. He is an expert on international projection on the study of metastasis, and since November 2013, has been the Director of the Sloan Kettering Institute in New York, the scientific branch of MSKCC, one of the main cancer research centers in the world.

Josep Baselga is Medical Director at the Memorial Sloan Kettering Hospital in New York, leading center regarding fight against cancer, and he presides the American Association of Cancer Research (AACR), an organization representing 34.000 professionals and researchers. Baselga, an international reference on breast cancer, was also the Director of the Vall d’Hebron Oncology Institute (VHIO) of Barcelona.