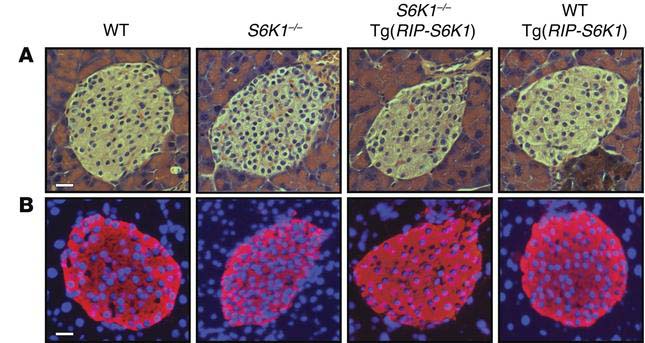 Currently, there are more than 350 million type 2 diabetics and according to the World Health Organization (WHO) by 2030 it will be the 7th leading cause of death worldwide.

The hallmark of type 2 diabetes is insulin resistance, which is initially compensated for by an increase in beta cell size (responsible for producing insulin). However, the beta cells of such patients will eventually collapse and die, leading to full blown type 2 diabetes.

Researchers from the Laboratory of Cancer Metabolism at IDIBELL, led by Sara Kozma, have shown in animal models that inhibition of S6K1 protein may be a potential treatment for type 2 diabetes.

In a study published this week in the Journal of Clinical Investigation, they have shown that animals lacking S6K1, a protein kinase, are more sensitive to insulin, so they require less and do not develop diabetes.

In previous studies the Kozma group had observed that S6K1 deficient mice were smaller in size and displayed reduced circulating insulin levels in the blood. “We showed that beta cells of these animals were smaller and produced less insulin,” explains the researcher. “We also showed that in the absence of S6K1, peripheral tissues of the animal became more sensitive to insulin and did not develop diabetes, even when placed on a high fat diet.”

In this study, the Kozma group used embryonic rescue methodology to understand why beta cells of S6K1 deficient mice were smaller. They aggregated S6K1 deficient embryonic stem cells, with placentas of wild type mice and observed that although embryos developed to the normal size, beta cells remained small. The beta cell size was independent of the mouse development in utero, yet the absence of S6K1 in peripheral tissues increased whole animal insulin sensitivity. Thus inhibitors of S6K1 may serve as potential insulin sensitizers to protect against insulin insensitivity and to treat type 2 diabetes.

Share on Facebook
Share on Twitter
Share on Linkedin
Share on Email
Tweets by @idibell_cat
Tags: Metabolism and Cancer,
Manage Cookie Consent
To provide the best experiences, we use technologies like cookies to store and/or access device information. Consenting to these technologies will allow us to process data such as browsing behavior or unique IDs on this site. Not consenting or withdrawing consent, may adversely affect certain features and functions.
Manage options Manage services Manage vendors Read more about these purposes
View preferences
{title} {title} {title}
Scroll to Top